The Curé of Ars - On The Sacrament of Confession 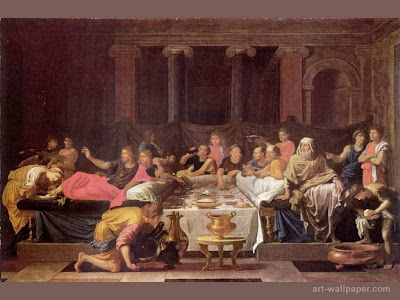 The Sacrament of Penance by Nicholas Pouissin

Saint John Vianney's Catechism on Confession is too important not to be shared here in its entirety.


My children, as soon as ever you have a little spot upon your soul, you must do like a person who has a fine globe of glass, which he keeps very carefully. If this globe has a little dust on it, he wipes it with a sponge the moment he perceives it, and there is the globe clear and brilliant. In the same way, as soon as you perceive a little stain on your soul, take some holy water with respect, do one of those good works to which the remission of venial sins is attached – an alms, a genuflection to the Blessed Sacrament, hearing a Mass. My children, it is like a person who has a slight illness; he need not go and see a doctor, he may cure himself without. If he has a headache, he need only go to bed; if he is hungry, he has only to eat. But if it is a serious illness, if it is a dangerous wound, he must have the doctor; after the doctor come the remedies. In the same way, when we have fallen into any grievous sin, we must have recourse to the doctor, that is the priest; and to the remedy, that is confession.

My children, we cannot comprehend the goodness of God towards us in instituting this great Sacrament of Penance. If we had had a favor to ask of Our Lord, we should never have thought of asking Him that. But He foresaw our frailty and ourinconstancy in well-doing, and His love induced Him to do what we should not have dared to ask. If one said to those poor lost souls that have been so long in Hell, "We are going to place a priest at the gate of Hell: all those who wish to confess have only to go out," do you think, my children, that a single one would remain? The most guilty would not be afraid of telling their sins, nor even of telling them before all the world. Oh, how soon Hell would be a desert, and how Heaven would be peopled! Well, we have the time and the means, which those poor lost souls have not. And I am quite sure that those wretched ones say in Hell, "O accursed priest! if I had never known you, I would not be so guilty!"

It is a beautiful thought, my children, that we have a Sacrament which heals the wounds of our soul! But we must receive it with good dispositions. Otherwise we make new wounds upon the old ones. What would you say of a man covered with wounds who is advised to go to the hospital to show himself to the surgeon? The surgeon cures him by giving him remedies. But, behold! this man takes his knife, gives himself great blows with it and makes himself worse than he was before. Well, that is what you often do after leaving the confessional. My children, some people make bad confessions without taking any notice of it. These persons say, "I do not know what is the matter with me"... They are tormented, and they do not know why. They have not that agility which makes one go straight to the good God; they have something heavy and weary about them which fatigues them. My children, that is because of sins that remain, often even venial sins, for which one has some affection. There are some people who, indeed, tell everything, but they have no repentance; and they go at once to Holy Communion. Thus the Blood of Our Lord is profaned! They go to the Holy Table with a sort of weariness. They say, "Yet, I accused myself of all my sins... I do not know what is the matter with me." There is an unworthy Communion, and they were hardly aware of it!

My children, some people again profane the Sacraments in another manner. They have concealed mortal sins for ten years, for twenty years. They are always uneasy; their sin is always present to their mind; they are always thinking of confessing it, and always putting it off; it is a Hell. When these people feel this, they will ask to make a general confession, and they will tell their sins as if they had just committed them: they will not confess that they have hidden them during ten years – twenty years. That is a bad confession! They ought to say, besides, that they had given up the practice of their religion, that they no longer felt the pleasure they had formerly in serving the good God.

My children, we run the risk again of profaning the Sacrament if we seize the moment when there is a noise round the confessional to tell the sins quickly which give us most pain. We quiet ourselves by saying, "I accused myself properly; so much the worse if the confessor did not hear." So much the worse for you who acted cunningly! At other times we speak quickly, profiting by the moment when the priest is not very attentive to get over the great sins. Take a house which has been for a long time very dirty and neglected – it is in vain to sweep out, there will
always be a nasty smell. It is the same with our soul after confession; it requires tears to purify it. My children, we must ask earnestly for repentance. After confession, we must plant a thorn in our heart, and never lose sight of our sins. We must do as the angel did to St. Francis of Assisi; he fixed in him five darts, which never came out again.