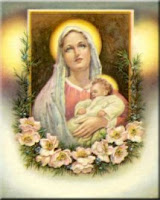 "Two years before my ordination, I was stricken with a severe attack of tuberculosis. In that infirmary, I reached the depths of discouragement and hopelessness. But it was there too that I really found Mary. In my darkest hour, I tuned to her for help. She responded with love. I recovered, returned to the seminary and was ordained."

"Thanks to the family that always prayed the Rosary, I had come to know who Mary was and that Jesus Christ, her Son, had entrusted me to her love and care. I asked her with all my heart and soul to pray to her Son for my cure."

In 1945, the Mutual Broadcasting System, the largest radio network in the United States at that time, made available a half-hour to broadcast the Rosary. This was the opportunity of a lifetime. The program had to be good. It had to prove the Rosary for all its worth. To whom could I turn for help? Naturally, to Our Lady. She came through:
Invite the most famous, loved and revered family to pray the Rosary;
Ask the most famous Hollywood stars to join them;
Have the most influential people in the US Church speak; and
Choose the most fitting day to have the majority of Americans listening eagerly to a religious broadcast.
All of that happened:
The day was Sunday, May 13, 1945: Mother's Day, Fatima Day and a day of thanksgiving for victory in Europe.
Cardinal Spellman of New York was lined up to speak.
The Sullivan family of Iowa, whose five sons had gone to their death together on a battleship that sank in the Pacific, led the Rosary.
Bing Crosby agreed to participate.

The following day, the broadcast was acclaimed as the most touching program of all, and the Family Rosary Crusade was launched. What Bing Crosby did, others would do. Hundreds of them, Pat O'Brien, Loretta Young, Grace Kelly, James Cagney, gave their names, fame, time and talent to glorify the Rosary and dramatize its mysteries on film, on the radio and on television.

Father Patrick Peyton - "The family that prays together stays together."

Pray for his beatification Jackie.