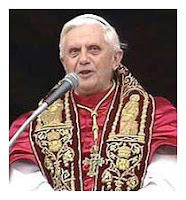 VATICAN CITY, MARCH 21, 2007 (Zenit.org).- The use of reason is the antidote to false religious myths and relativism, says Benedict XVI.

The Pope said this at today's general audience, held in St. Peter's Square. The Holy Father continued with his series of teachings on protagonists in the early Church; today's address was dedicated to St. Justin Martyr.

The Pontiff recalled the path of conversion which St. Justin followed: He searched for truth in the various schools of Greek philosophy until he discovered Christianity, which he called the "true philosophy."

Benedict XVI added: "In Christianity, in fact, he had found the truth and, therefore, the way to live uprightly. Because of this he was denounced and decapitated around the year 165, under the reign of Marcus Aurelius, the emperor-philosopher to whom Justin had dedicated an 'Apologia.'"

The Pope continued: "Justin aims above all to show the divine projects of creation and of salvation brought about by Christ, the 'Logos,' that is, the eternal Word, eternal Reason, creative Reason.

"Every person, as a rational creature, participates in the 'Logos,' carrying within himself a 'seed,' and can perceive glimmers of truth. In this way, the same 'Logos,' who had revealed himself as a prophetic image to the Jews in the Old Covenant, had also partially revealed himself, as with 'seeds of truth,' in Greek philosophy.

"Thus, Justin concludes, given that Christianity is a historical and personal manifestation of the 'Logos' in its entirety, 'all that is beautiful which has been expressed by anyone, belongs to us Christians.'"

"Justin, and with him other apologists, took the position of the Christian faith as the God of the philosophers instead of the false gods of the pagan religion," the Pontiff said. "It was a choice for the truth of being versus the myth of traditions."

"In an era such as ours," Benedict XVI added, "marked by relativism in the debate on values and on religion -- as well as in interreligious dialogue -- this is a lesson that should not be forgotten."
ZE07032102
Posted by EC Gefroh Posted 2:32 PM