Picture source
Saint Agatha was a beautiful young woman of noble birth. She caught the eye of a Roman governor by the name of Quintanius, who wanted to make her his wife. During this time there was a persecution of Christians under the Emperor Decius. It was Decius who ordered her arrest for being a Christian.

Her prayer during the time of her arrest:

"O Jesus Christ,
Lord of all things,
Thou seest my heart and
knowest my desire,
which is to possess only Thee,
since I have consecrated myself entirely to Thee.
Preserve me, dear Lord,
from this tyrant and
enable me to overcome the
devil, who layeth snares for my soul."

..."When the saint appeared before Quintanius, in order the more easily to overcome her modesty, he gave her up to Aphrodisia, an abominable woman, who, together with her daughters, publicly professed immodesty. In her infamous house the saint suffered greater torture than the darkest and most fetid dungeon could afford.

All the arts of Aphrodisia and her partners in crime were unceasingly applied, in order to induce the saint to comply with the wishes of Quintianus; but Agatha, who from her infancy had been consecrated to Jesus Christ, was enable by His divine grace to overcome all their attempts..."


The saint was once again brought before Quintanius. She courageously confessed to being a Christian.


"In order to give the governor to understand how infamous were the deities which he adored and desired her to worship, she asked whether he would wish that his wife should be a prostitute, like Venus, or that he himself should be considered an incestuous adulterer like Jupiter."

The next day she was again brought before the governor and was asked if she would like to save her life. She replied: "God is my life and my salvation." She was then tortured but "perceiving how little it affected her, he commanded her breasts to be lacerated, and afterward cut off, which was executed with barbarous cruelty. 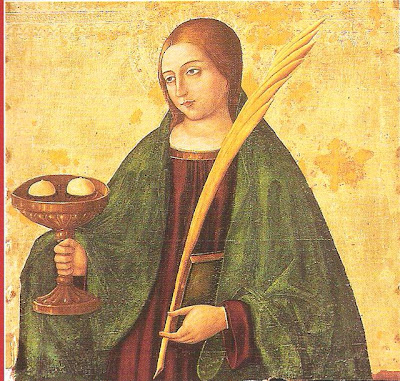 Picture source
When she perceived her life coming to a close she prayed:


"O Lord, my Creator, who hast preserved me from my infancy,
hast given me strength to
overcome these torments, and
hast taken from me the love of the world,
receive now my soul.
It is time that I should at last
pass from this miserable life
to the fruition of Thy glory."

Source of her story and the prayers - Victories of the Martyrs by St. Alphonsus of Liguori

At Mass this morning my mom told me the Polish priest blessed bread. He explained it was a Polish tradition to bless bread on the Feast of St. Agatha. This bread is not to be eaten. Instead,  it becomes a sacramental in order to protect the home against the ravages of fire. This tradition was new to me. I did find this blog post that explains more on the St. Agatha bread blessing.

Oh St. Agatha, who withstood the unwelcome advances from unwanted suitors,
and suffered pain and torture for her devotion to Our Lord,
we celebrate your faith, dignity and martyrdom.
Protect us against rape and other violations,
guard us against breast cancer and other
afflictions of women, and inspire us to overcome adversity.
Oh St. Agatha, virgin and martyr,
mercifully grant that we who venerate your sacrifice,
may receive your intercession. Amen.