The photos were taken at the Marian Shrine in Stony Point New York. There is a replica of Saint John Bosco's house at the shrine.

Prayer to Saint John Bosco
O glorious Saint John Bosco, who,
in order to lead young people to the feet of the divine Master
and to form them in the light of faith
and Christian morality,
didst heroically sacrifice thyself to the very end of thy life
and didst found a fitting religious Institute destined to endure
and to bring to the farthest boundaries of the earth thy glorious work,
obtain also for us from our Lord a holy love for young people,
who are exposed to so many seductions,
in order that we may generously spend ourselves in supporting them
against the snares of the devil,
in keeping them safe from the dangers of the world,
and in guiding them, pure and holy,
in the path that leads to God. 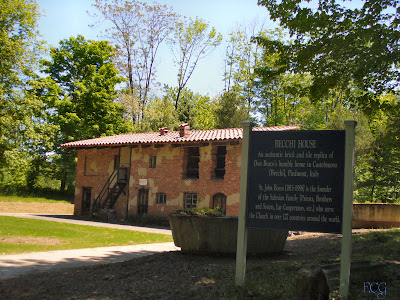 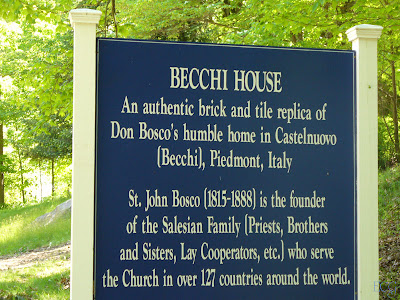 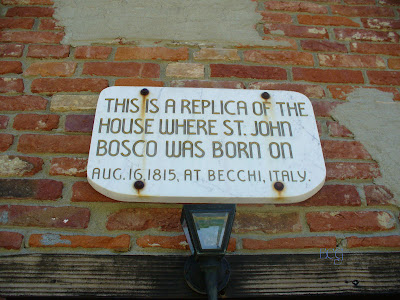 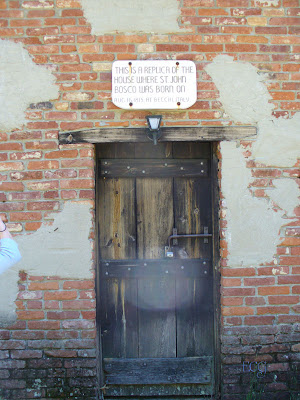 "Don Bosco dreamed that he was a Becchi. His mother was down by the pump with a bucket in her h and, scooping up dirty water that flowed into a trough. This pump had always given clean water, so Don Bosco wondered how the change had come about.

'Aquam nostram pretio bibiumus,' Mama Margaret said...."The elevated ground where my mother led me is suitable for starting some work of ours, because it is at the center of a circle that takes in quite a number of places that have no church."

Later, a vocational school was built on this spot.. The school gets its water supply from the municipality.

- A School for Becchi

"...An Oratory is needed here for these girls. There are private schools for them, but there is no Oratory where they can gather."

Just as he was passing the square, the little girls left their games and flocked around him, shouting: "Oh, Don Bosco, give us an Oratory for ourselves. We are at the mercy of the devil, who does so much harm among us. Help us. Open a haven of safety for us. Open an Oratory for us."

My children, I cannot do that. I am at an age when I cannot see to such things any more. Pray to God and He will provide.'

"Yes, yes, we will pray, but you must help us and gather us under the care of Mary Help of Christians."

"Alright! Now tell me where you want me to open an Oratory."...Help Us Also 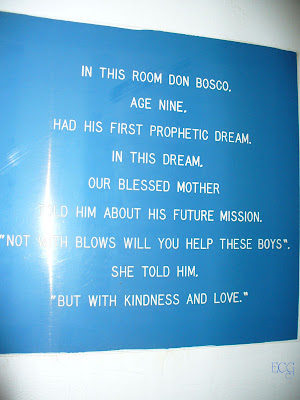 "...The Lady looked at John intently and lovingly and then said, 'If you wish to win over these boys, do not hit them:  be kind and appeal to their better selves."
- Dream of St. John Bosco of the Blessed Mother.


In one of his many dreams, Don Bosco dreamed of his beloved mother who had died. He asked her to tell him what she enjoyed about Heaven:

"...Mamma Margaret then appeared radiant with majesty and clothed in a magnificent robe. As a large choir stood in the background, she began to sing a song of love to God that was indescribably sweet and went straight to the heart, filling it and carrying it away with love...When Mamma Margaret had finished singing, she turned to him and said: 'Ill be waiting for you. The two of us must always be together." 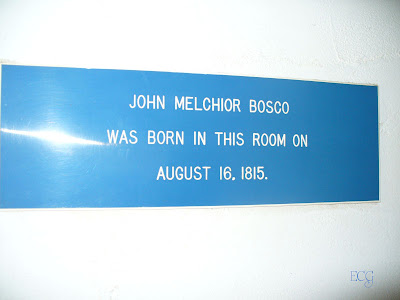 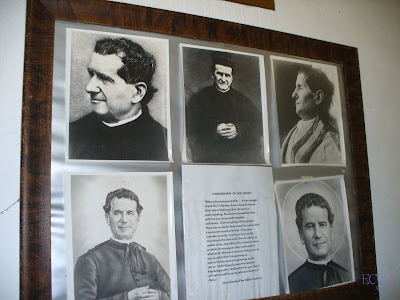 "...Some may wonder why I have chosen to write of Dominic Savio rather than of one of those other pupils who have left behind a great reputation for virtue; such boys, for instance as Gabriel Fassio, Louis Rua, Camillo Gavio, or John Massglia; but none of them was so well known as Savio, whose life was notably marvelous; and if God spares me and gives me the grace to do so, I hope to collect the necessary materials for writing about these boys also, as models for this and every generation.

I hope that those who read this book will say, with St. Augustine, SI ILLE, CUE NON EGO? If he can do it, why not I too? Let it be remembered that true religion consists not only of words but also of actions, and so instead of saying, "That is fine," let the read say rather, "Why shouldn't I try to imitate Dominic in that?"

May God grant grace to all who read this life, that they may profit by it, and may the Blessed Virgin, to whom Savio was such a devoted servant, grant to them that they may love and serve God only, for He alone deserves that we should love Him above all things all the days of our life." - Saint John Bosco's prologue to the Life of Blessed Dominc Savio, 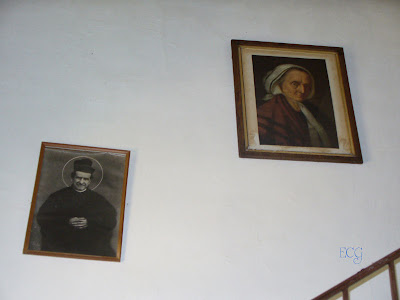