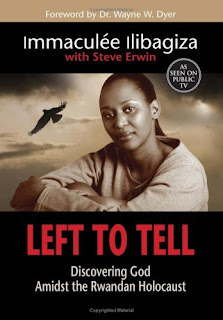 Picture courtesy of Left to Tell 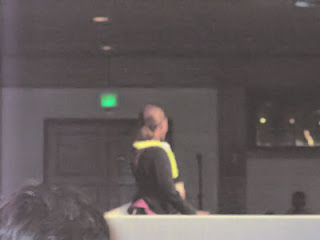 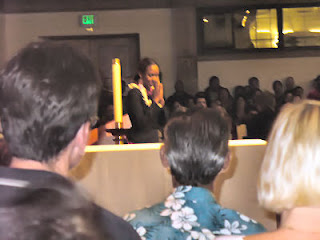 I must start off by apologizing for the photos. We were sitting pretty close but I felt uncomfortable taking pictures in a Church.

My family and I and what appeared to be all of Oahu, just kidding... but it was standing room only, went to see and hear Immacule'e Ilibagiza last evening.

For those of you not familiar with this amazingly spiritual lady, she was the only member of her family who survived the horror of the Rwanda genocide, in 1994.

She is a beautiful and graceful woman. She spoke in a soft voice and many times she made us laugh. This morning as I reflected on her talk last night, I was impressed so deeply that someone who had lived through a nightmare beyond our normal comprehension, could still be funny and love life.

She and her family were Catholics and members of the minority Tsutsi tribe in Rwanda. Their nightmare began when the President of Rwanda died. Her parents told her that she must go into hiding. They sent her to the home of a neighboring Protestant pastor and a member of the rival Hutu tribe. Before she left her parents, her father gave her a Rosary.

The pastor told her that he must hide her or she would be killed. In that short time, she and another seven women were hid in a bathroom that was 3' x 4'. They were instructed not to flush the toilet or talk.

For the first two days, they weren't even given food to eat because of fear that they would be found. Finally, the pastor was safely able to bring them something to eat.

During this ordeal where she and the others learned that people were being killed, she felt anger and hatred. She prayed the Rosary but at the parts of the Our Father where she had to pray "and forgive us our trespasses as we forgive...." she just skipped over that part. She could not forgive the killers for what they had done.

There were a few times when the killers searched the home of the pastor. Immacul'ee would pray to God thusly "If You are real, don't let them find us". God answered her prayers because she heard the killers tell the pastor..."You know we trust you. There is no way you can hide those cockroaches...enemies of the country". They were in fact standing right outside the bathroom door.

During this time she continued to feel fear and anger. She felt that their ordeal must be worse than Purgatory because at least in Purgatory, we have no body to feel pain.

She continued to pray the Rosary but now she prayed to stop being angry and feeling hate. During her days in hiding she would pray about 7 Rosaries and 14 Chaplets of the Divine Mercy daily.

So she continued her interior struggle between love and hate, realizing that both emotions could not live together and still have God on her side. She finally asked God to help her forgive.

Immacul'ee told us that it was only during this time in hiding that she finally could meditate deeply on what sufferings Christ had endured for love of us and how His mother had suffered.

She spoke about the dangerous gift God gave us, that of Free Will. She felt that God must be so sad to see how His gift was misused.

By the time she and the others were safe enough to leave the bathroom, three months had past. Immacul'ee said she weighed only 65 lbs.

She found out that all of her family members had been killed. All together over a million people were killed during a three month reign of terror.

She specifically warned us in the audience that this could happen anywhere and at anytime if we didn't love God and our neighbor. It seems that the people in Rwanda did not like their president at the time before the genocide. They wished that he would die. And, guess what? He did die and that country's nightmare began. She told us not to hate our president but to pray for him....to pray for our country's leaders. Very poignant especially when think about how many in our own country and in the world feel about our current president.

There is so much more I could share but I would recommend you read more about her yourself in her book Left to Tell. Her message was that of love and forgiveness and above all trust in God. She told us that if we lost everything like she did but had the Holy Bible and our Rosary...and of course God, we didn't need anything else. I noticed that the audience was mixed by that I mean, not all Catholics. Not once did she mention she was Catholic but she was a one-woman evangelist for the Catholic Church by her simple and loving words.
Posted by EC Gefroh Posted 1:12 PM

We saw a sign for her downtown today on the way to pro-life, I wonder if she is coming here or has already been here.

Thank you Esther for bringing this to the attention of all of us who never heard of her. What a messenger of God she is. Forgiving our little problems seem so mundane compared to what she is forgiving. May her words spread throughout our country with the message to pray for our leaders.

She is coming to a parish near me -- I will definitely try to go see her!

She will probably be speaking near you Sunny. I hope you get to see her.

Micki, she really is a messenger of God. She does put things in perspective.

Monica: I hope you get to hear her. Bring her book for her to sign. I thought they were going to sell her books at the Church but they didn't. :-(