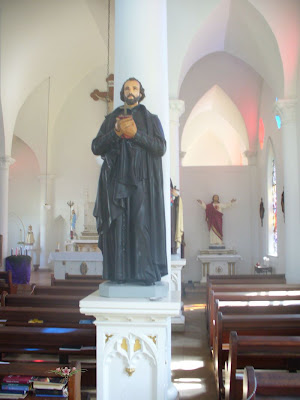 Today the church honors one of our patron saint of the missions, St. Francis Xavier.  This statue is prominently placed at St. Francis Church, Kalaupapa.

St. Francis Xavier often spent whole hours during the day and into the night before Jesus in the Most Blessed Sacrament, Who gave Him the grace and the strength to lead so many souls to Christ. His devotion to Our Eucharistic Lord was so great that Fr. Stefano Manelli, O.F.M. writes (in his book, Jesus, Our Eucharistic Lord):
"What shall we say of St. Francis Xavier who at times when distributing Holy Communion felt so carried away by a sense of adoration toward Our Lord Who was in his hands, that he got on his knees and in that position continued giving Holy Communion? Did that not present a witness of faith and love worthy of heaven?"

St. Francis Xavier
Spain ~ 1506-1552
One of seven founders of Society of Jesus (Jesuits)
Considered "greatest missionary since the time of the Apostles"
Incredible zeal, baptized thousands, miracle worker
Patron of mission fields
Known as the "Apostle to the Far East"
Incorrupt
FEAST DAY - December 3
St. Francis Xavier - from his letters to Saint Ignatius ...
“Many, many people hereabouts are not becoming Christians for one reason only: there is nobody to make them Christians. Again and again I have thought of going round the universities of Europe, especially Paris, and everywhere crying out like a madman, riveting the attention of those with more learning than charity: “What a tragedy: how many souls are being shut out of heaven and falling into hell, thanks to you!”
“I wish they would work as hard at this as they do at their books, and so settle their account with God for their learning and the talents entrusted to them.
“This thought would certainly stir most of them to meditate on spiritual realities, to listen actively to what God is saying to them. They would forget their own desires, their human affairs, and give themselves over entirely to God’s will and his choice. They would cry out with all their heart: Lord, I am here! What do you want me to do? Send me anywhere you like — even to India.”
This Eucharistic Reflection is archived.
CLICK HERE: http://truthhimself.blogspot.com
Posted by EC Gefroh Posted 3:45 PM