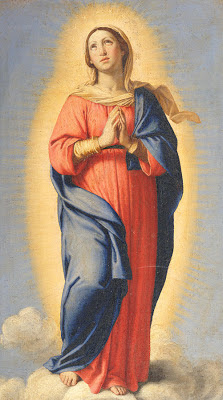 At the beginning of the liturgical year we honor the immaculately conceived Virgin Mary. The solemnity of Mary’s Immaculate Conception is celebrated on December 8, and honors the conception of Mary in the womb of her mother, St. Anne, without original sin.

In 2008 we celebrated the 150th anniversary of the Blessed Virgin’s apparitions at Lourdes, where she identified herself to St. Bernadette as the Immaculate Conception.  In 2004 we observed the 150th anniversary of Blessed Pope Pius IX’s solemn definition of this dogma on December 8, 1854.  Blessed Pius IX explained that Mary was preserved from original sin by a “singular grace and privilege” given her by God “in view of the merits of Jesus Christ,” Redeemer of the human race.  Mary, like every other human being, needed the redemptive benefits of Christ.  But in anticipation of what God did for all through Christ, she alone was preserved from original sin “from the first moment of her conception.”  As one writer asserted, hers was a “redemption by exemption.”  By her Immaculate Conception she was conceived in the fullness of grace, in the state of closest possible union with God in view of her future role as the Mother of the Redeemer.

The feast of the Immaculate Conception of Mary was celebrated already in the seventh century in Palestine as the Conception by St. Anne of the Theotokos (Mother of God) on December 9.  The doctrine is understood differently by some Eastern Christian Churches because of a variance in their theological understanding of original sin.  The observance spread west from Constantinople.  Still called the Conception of St. Anne and observed on December 8, it was prominent in Naples in the ninth century; in English monasteries in the eleventh century, when it was called the feast of the conception of Our Lady; and in France in the twelfth century.

When the feast was introduced in France, St. Bernard of Clairvaux opposed it, igniting a controversy that endured for three centuries.  Most Scholastic theologians, including St. Anselm of Canterbury, St. Albert the Great, St. Thomas Aquinas, and St. Bonaventure opposed the doctrine on the grounds that it detracted from the universality of the redemption by Christ.  But it was defended and explained with theological clarity in the thirteenth century by Blessed John Duns Scotus, a Franciscan.  In 1263 the Franciscans adopted the feast.

The opponents of this feast and doctrine had argued that Mary had to be touched by original sin for at least an instant, even though she was sanctified in her mother’s womb.  John Duns Scotus resolved these objections by explaining that Christ can save and redeem in two ways: he can rescue from sin those already fallen; or he can preserve one from being touched by sin even for an instant.  Mary was granted “redemption by exemption.”

The Council of Basel in 1439 affirmed this belief.  Ten years later the Sorbonne in Paris required all its degree candidates to pledge an oath to defend the Immaculate Conception of Mary.  Pope Sixtus IV in 1476 approved the feast with its proper Mass and Office, and in 1708 Pope Clement IX extended the feast to the universal Church and made it a holyday of obligation.

Later the Council of Trent (1545-1563) explicitly declared that Mary was exempt from the taint of original sin.  From then on the belief was embraced generally and defended by all schools of theology.  Many Catholic thinkers and founders of the eighteenth and nineteenth centuries promoted and expounded Mary’s Immaculate Conception with special interest and verve, and this doctrine became an important part of many Marian spiritualities.  One such exponent was Blessed William Joseph Chaminade (1761-1850), founder of the Marianist Family.

At the First Council of Baltimore in 1846 the Catholic bishops of the United States of America chose Mary under the title of her Immaculate Conception as the patron saint of the nation.  This deepened interest in the vast new country.

The apparition of Mary Immaculate to St. Catherine Laboure in 1830 at Paris had also advanced this devotion.  At that time Mary asked the young nun to produce the Miraculous Medal, which honored the Immaculate Conception.  And the solemn definition in 1854 was the culmination of this development.  Like an additional seal of approval on the definition four years later Mary appeared to the uneducated and sickly youngster, St. Bernadette Soubirous, at Lourdes.  When Bernadette asked the Virgin Mary on March 25, 1858, to identify herself, Mary replied, “I am the Immaculate Conception.”

To celebrate the centenary of the definition of Mary’s Immaculate Conception, Pope Pius XII, a devout apostle of Mary, declared 1954 a Marian Year -- the first.

Now, more than 150 years later, we are privileged to continue to honor that solemn definition and its recognition by Mary Immaculate at Lourdes.

“O Mary conceived without sin, pray for us who have recourse to you.”

This was an interesting read. Our sermon on Sunday was about the Conception of the Theotokos (which as the article noted is the 9th, and is understood differently than Roman Catholic belief, as we don't believe in the Immaculate Conception) and on the way home we were discussing when the divergence between dates happened, so I appreciated that part.
:)

Mimi, I didn't know that. Interesting.