Holy Thursday - Institution of the Sacrifice of the Mass 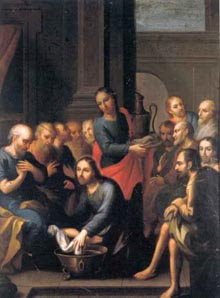 Our Blessed Lord instituted this sacrifice of the Mass at the Last Supper. On the very night in which He was betrayed, He changed bread and wine into His Body and Blood, and gave to the Apostles and to their successors, the power to do the same in commemoration of Him. In obedience to the commands of our Lord, the Apostles frequently offered up the Holy Sacrifice of the Mass, as we see from the Acts of the Apostles (Chap .ii. 42) and from the writings of the Fathers of the Church...When St. Andrew, the Apostle, was required by the tyrant Aegeas, to sacrifice to the gods, if he wished to escape the punishment of the cross, he replied: "I daily offer up on the altar to the only true and Almighty God, the Immaculate Lamb, which though it is consumed, remains always living and entire...An altar implies a sacrifice, since an altar is used only for sacrifice... The Fathers of the Church commonly speak of the Mass as 'a salutary sacrifice. St. Cyprian...calls it 'an everlasting sacrifice.' St. Augustine...declares it to be 'a true and august sacrifice, and that it has supplanted all former sacrifices.'...St. John Chrysostom: 'O wonder!' he exclaims in his Homily De Sacra Mensa, 'At this table, so magnificently furnished, the Lamb of God is immolated for thee; there the Cherubim are present; there the Seraphim attend; there all the Angels join with the priest in praying for thy welfare.'


...in his book, De Sacrificio, he says: "When thou beholdest the Lord immolated and lying upon the altar and the priest bending over the sacrifice and praying and all the assistants reddened with that precious blood, dost thou think that thou art still on earth? Does it not rather seem to thee that thou art wrapt into Paradise, and beholdin, with the eye of thy soul, the things that are done in heaven?" 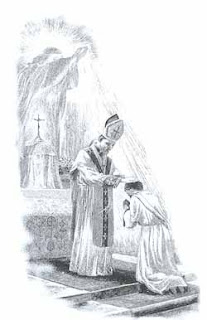 ..."How surpassingly pure ought he to be who offers such a sacrifice?  Ought not the hand that divides this sacred flesh-- the mouth that is filled with this spiritual fire--the tongue that is dyed with this most sacred blood be purer than the light of the suns?  Think how though are honored, to what a banquet thou art admitted!  Thus, before which the Angels tremble and veil their faces, is our food; we are united to Christ; we are made one body and one flesh with Him!"...

Excerpts from The Blessed Eucharist: Our Greatest Treasure by Fr. Michael Muller, C.S.s.R.
Posted by EC Gefroh Posted 9:04 AM