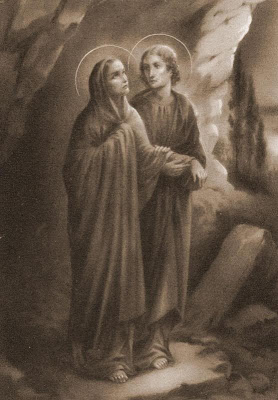 
For three hours, Satan contemplated his masterpiece, the dying Jesus. How easy it had been, after all! Years before, Satan had borne Jesus to the temple roof, and challenged Him: "Cast Thyself hence!" Jesus had overcome him with a refusal to presume upon His Father's power. Now, borne high on Calvary, Jesus is again challenged. "Cast Thyself hence! Come down from the cross! He refuses, and Satan claims the victory. But then Jesus dies, and the centurion cries aloud: "This is God's Son"; the temple curtain is ripped in two, the dead rise from their graves, heaven's gates open wide, and Jesus triumphantly leads a repentant thief into Paradise.

Jesus' refusal to come down from the cross was His greatest victory over Satan. By accepting my life's crosses patiently, prayerfully, I overcome hell.

Thank you! This is beautiful. We wait in expectation. Hosanna!

You're welcome Alexandra. I am responding to you as I listen to Mother Angelica telling us quite clearly that there is a hell and it is forever!