Cardinal Bertone: 'Christians the Most Persecuted Religious Group in the World' 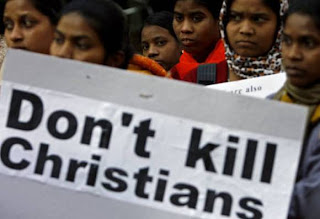 Note:  While searching for an appropriate picture to go along with this post, I found very graphic photos of murdered and tortured Christians.  One that impacted me was the decapitated head of a young girl, laying along side her body.  Pray, pray and continue to pray for the persecuted Christians all over the world.


"It was a Sunday and evening mass had just begun. Shortly after the Gospel reading, about 17.15, we heard the sound of gunfire outside the church. Father Tha'er, who was celebrating the liturgy, tried to calm everyone down, telling us to pray together. The noise became louder, then we heard a loud explosion and the terrorists entered the Church - five or six in all - and started shooting everywhere.."

"I saw the injured girl. I decided to go and get her to try and bring her to safety. I took her on my shoulders, but one of the terrorists saw me and threw a grenade at us: the girl died and I was on the ground wounded. I pretended to be dead.

Thanks to Sue Cifelli for sharing.
Posted by EC Gefroh Posted 9:17 AM