Feast of the Annunciation 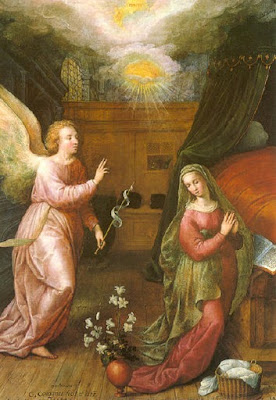 Shared by Father Vince I.

The following are points of meditation by Terrence Cardinal Cooke from the a collection of his sermons Meditations of Mary.


"Mary's faith was the most perfect that ever existed and it is most worthy of our admiration and imitation. In speaking about our Lady's faith, we might mention that we do not find the virtue of faith in the soul of Our Divine Lord, for faith is 'the evidence of things we see not' and the human soul of Christ ever beheld the beatific vision of the Divine Essence...

...Eve, contrary to the assurance she had received from God, believed the serpent and brought death into the world. Mary, Our Queen, believed the angel when he told her that she, remaining a virgin, would become the Mother of God and in this way, she brought salvation into the world. St. Augustine says, that when Mary consented to the Incarnation of the Eternal Word, by means of her faith she opened heaven to men...

Excerpt from Conferences by the Servant of God Terence Cooke: Meditations on Mary, Alba House, NY.
Posted by EC Gefroh Posted 9:01 AM

A blessed Feast Day to you! It is my youngest son's birthday, so it is a doubly good day.

Happy Feast Day to you, Mimi and a very happy birthday to your youngest!