The Traditional Way of Setting Up the Nativity 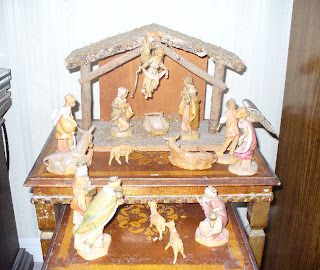 Lisa has a very informative post about setting up the Creche. I found this interesting because this year our family will not be getting a Christmas tree. We will do the more traditional Peruvian custom on focusing the attention on the Nativity.

Traditinal Manner of Setting Up the Creche

The Traditional Manner of Setting Up the Creche

The Christmas Crib, or Creche, affords an effective and visible means of teaching the facts of Our Lord's Incarnation to all members of the parish, children and adults. Just as the Stations of the Cross is a pilgrimage in spirit along the way of Sorrows to Our Lord's Crucifixion, so the Christmas Crib is intended to foster the pious desire of the faithful to venerate His Lowly Birthplace.

On December 8th,
the day on which we celebrate the beginning of the spotless life of the Blessed Virgin Mary, the framework of the Crib is set up. This framework symbolizes the Virgin Mary's part in the Incarnation, for she was the "framework," or instrument, chosen by God, for the "god-bearer," the mother of Our Lord's humanity. The framework of the Crib (the stable) is covered by a Virgin Blue Veil upon which has been placed the double Davidic triangle, or star, and before the Crib a blue vigil light burns. All of this is very significant and teaches great lessons.

The Blue Veil is a symbol of the Messianic prophecies relating to the person of Our Lord. "Therefore, the Lord Himself shall give you a sign; behold a Virgin shall conceive, and bear a son, and shall call His Name Immanuel." (Isaiah vii, 14)

The Davidic star is a familiar emblem of the Trinity and is a combination of two equal triangles, one with the apex upward and the other with the apex downward, thus forming a six-pointed star enclosing a hexagon, which is the symbol of the six attributes of God. The star is also a symbol of creation, expressing the fact that it was the Triune God: Father, Son and Holy Ghost, who created the heavens and the earth. The Davidic star also expresses the truth that Our Lord not only is God, but that He also sprung from the Royal Seed of the House of David, insofar as His Blessed Mother and the lineage of His Human Body are concerned. (St. Mat. i, 1-18)

The blue vigil light symbolizes the dim light of faith which burned in the hearts of the faithful all through the centuries preceding Our Lord's Birth. It is also symbolic of His Second Advent when "He shall come again, in glory, to judge both the living and the dead, whose Kingdom shall have no end."

On December 18th,
the day of expectation, the animals are placed in the stable, These too are symbolic of Our Lord's earthly mission and foreshadow certain events pertaining to the Ministry of the Incarnate Son of God. The lamb prefigures the words of St. John the Baptist, "Behold the Lamb of God, which taketh away the sin of the world." The ox, the beast of burden, prefigures Our Lords' own words "Come unto me, all ye that are heavy laden and I will give you rest. Take my yoke upon you, for I am meek and lowly in heart, and ye shall find rest unto your souls; for my yoke is easy, and my burden is light." The foal of an ass foreshadows Our Lord's Royal entry into Jerusalem as foreseen by the prophet Zechariah: "Behold thy King cometh unto thee, lowly, and riding upon an ass, and upon a colt, the foal of an ass." (Zech. ix, 9; St. Matt. xxi, 5)

On December 24th,
the Eve of the Christ Mass, the Holy Family and the lowly shepherds, the first to be brought the "good tidings of great joy" about the Saviour's birth, are placed in the stable and the blue veil is removed, to show that the Messianic prophecies are fulfilled.

On January 6th,
the Feast of the Epiphany, or the Manifestation of Christ to the Gentiles, the shepherds are replaced by the Wise Men, or Magi. The Feast of the Epiphany commemorates the visitation of the learned men from the East (probably Persia) who, by following the new star, which they knew meant the birth of a King, found the Christ Child. These Kings and their gifts are also symbolical -- the gold, of tribute to a King; the incense of adoration and prayer to God; the myrrh, of recognition as a mortal, a man of sorrows. These learned men would not have worshipped a mere child; even though He might have been of the lineage of earthly royalty. It was their conviction that Jesus was the destined God-Man incarnate, veiled in humanity.

Our Lord was nearly two years old by the time the Wise Men found Him and we read in St. Matthew ii, 11 that "when they were come into the house, they saw the young child with Mary His Mother, and fell down and worshipped Him." This explains why the Wise Men are not placed with the Nativity group until twelve days later, to denote the length of time which elapsed before they finally found the Child Jesus. To this day, the reigning Sovereign of England pays a twelfth-day oblation at the Offertory in the Mass, in gold, frankincense and myrrh, to commemorate this visit of the Wise Men to pay tribute to the King of Kings.

On January 13th,
the Octave of the Ephiphany, the Crib is removed, marking the close of the events surrounding the Nativity of Our Lord Jesus Christ.

"Let us become little with the Little One, that we may grow in stature with Him.

"Who for us men and for our salvation came down from heaven, and was incarnate by the Holy Ghost of the Virgin Mary, and was made man."

I wish I had had this when my children were growing up! We always set it up with reverence and had a blessing over it. This is a wonderful tradition! Cathy

Very interesting and informative, Esther. So much here I never really knew the meaning behind - and now I do!

Thank you for sharing this Esther.. this is new to me and very good to know:)

Oh, thank you for posting this. What great information.

Ann, I agree. I was so happy to see Lisa post about it.

Tracy, Easter and SC glad you enjoyed it.

Oh wow, that is interesting! We have our Nativity set on the kitchen table, did you see it? It's not as huge as yours but next year I will order a better one.

Alex would be devistated if we never had a Christmas tree ;) He cries when we take it down on Epiphany... :/

So instead, we have the Nativity Set up on our kitchen table so it's always in focus, instead of under the Christmas tree...

And Baby Jesus is in his manger, we'll start doing the tradition of waiting on putting him in the manger until Christmas day when he starts Sunday school... :)

Heather, that will be nice.