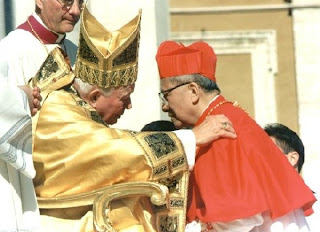 Last Saturday after Confession, Joey and I visited Pauline Books and Media as we sometimes do. We went looking for a movie to add to our growing Catholic movie collection. We didn't expect to be greeted by a new sister there who greeted Joey with "Have you thought about being a priest"? That opening line led to an interesting conversation with Sister Beatrice.

She asked me if I was familiar with Cardinal Francis Xavier Nguyen Van Thuan of Vietnam. Of course, I answered in the affirmative. We talked about the impressive writings of Cardinal Van Thuan while he was in prison. We both agreed that when he described celebrating Holy Mass on the palm of his hand as the altar with the consecration of the tiny piece of bread and small yet miraculous wine he was able to get a hold of, was the most moving of his memoirs. If you aren't familiar with his writings, the above story can be found in Testimony of Hope.


Every year, John Paul chooses someone to preach a course of spiritual exercises for himself and the Roman Curia at the Vatican. This Jubilee Year, he asked Vietnamese Archbishop Nguyen van Thuan.

As we paid for our movie (The Robe on DVD) Sister told me they had all of the Cardinal's books in stock. That statement took me by surprised because I thought The Testimony of Hope had been the only book he had written. She took me to the book rack that had one shelves full of the Cardinal's books. She picked out The Road to Hope for me to look at. The cover read "A Gospel from Prison". The back of the book read "An Imitation of Christ for the 21st Century"...Francis B. Schulte, Archbishop of New Orleans.


In 1975, Francis Xavier Nguyen Van Thuan was traveling to Saigon, Vietnam, to become its new Coadjutor Bishop. On the way, he was arrested and imprisoned--an incarceration that lasted thirteen years.

Despite tremendous risk, Van Thuan refused to remain passive. During his nights in prison, he wrote encouraging messages to the Vietnamese people. These brief reflections, scribbled on scraps of paper, were smuggled out of prison, copied by hand and circulated within the community. Bishop Van Thuan was thus able to remain connected to the people in a hidden yet powerful way.

The following two messages are from the God's Will Chapter. "God's will is the passport to heaven":


#17: Your responsibilities indicate the will of God for you at the present moment.

What could I do? I had to read this book.

I strongly recommend the above named books by Cardinal Thuan. It is a perfect book to bring with you during a Holy Hour of Adoration or for spiritual reading at home.

Please be sure to check out the other fine books and DVDs offered by the Daughters of St. Paul.

The following are Cardinal Van Thuan's 10 Rules for Life:

#1 I will live the present moment to the fullest.
#2 I will discern between God and God's works.
#3 I will hold firmly to one secret: prayer.
#4 I will see in the Holy Eucharist my only power.
#5 I will have only one wisdom: the science of the Cross.
#6 I will remain faithful to my mission in the Church and for the Church as a witness of Jesus Christ.
#7 I will seek the peace the world cannot give.
#8 I will carry out a revolution by renewal in the Holy Spirit.
#9 I will speak one language and wear one uniform: Charity.
#10 I will have one very special love: The Blessed Virgin Mary.

Source for photo and the above rules Our Lady of La Salette and St. Joseph's Church

Recently, Cardinal Van Thuan was in the news because his cause for canonization has been opened. Read it here

Wow, I loved the post! I have read the Cardinal's books and could go back to them regularly for inspiration and good material for homilies! His cause should be introduced for sure! Keep up the good work and God bless! Padre Steve, SDB

Thanks for the recommendation.
That will be my next book.
We are getting messages of Hope all around here in the US.

So true Teresa! I didn't see a connection until you mentioned it. Definitely a sign from God.

I hope you do read it Mary.

My books from Pauline Books & Media came today!
I am about to begin Card. Van Thuan's
'Road' & 'Testimony'.
Thanks for the inspirational recommendations.

Wonderful Teresa. Please let me know what you think.

Pauline Books & Media and the Daughters of St. Paul said...

I hope that you all have enjoyed your books so far! I just wanted to mention that we (Pauline Books & Media, that is) have several other books by/about Cardinal Van Thuan that I hope you won't mind me mentioning. There's a biography written by Van Thuan's friend called "The Miracle of Hope," a collection of his prayers: "Prayers of Hope, Words of Courage," and another book called "Five Loaves and Two Fish" in addition to the two you mention in your inspiring post.
I'd love to hear how you've all liked them so far!

Wow! Thanks for the recommendations Sally! I may just have to stop by PBM tomorrow!