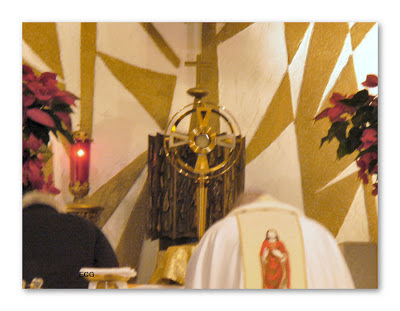 Note:  I am updating this post to include something I didn't have available when I first posted this.

The Catholic Church celebrates and commemorates the Feast of Corpus Christi.  Many churches will be exposing Jesus for Eucharistic Adoration in accordance with Pope Francis' request to join him in adoring our God.

At Adoration this morning I reflected on Father Mateo Crawley-Boevey's meditation that Jesus is imprisoned in the tabernacle.  With the guidance of the Holy Spirit I further reflected on just how Catholics and especially the priests were able to celebrate Mass or adore our Lord while they themselves were imprisoned.


A dungeon enclosed Jesus after He had been seized in the Garden of Olives, the evening of Holy Thursday.

The Tabernacle is the New Prison in which Jesus has shut Himself for love of us and where He will dwell until the end of time.

Twenty centuries have elapsed; but today as then, in one prison as in the other, He is still the same Jesus, treated with contempt, scoffed at, buried in opprobrium.

This Holy Hour should be an act of solemn reparation for the grievous sin committed by the ever-increasing number of Christians who practically pretend they love Jesus and the world with equal love...Let it be at the same time a merciful and stern lesson to the many Catholics who in their exterior religious life protest their loyalty to Our Lord, but in their social life ignore and gravely violate the Law of the supreme King of love...

Father Jean Bernard wrote about his imprisonment in the infamous Dachau concentration camp.  He and other priests were kept separated by the other prisoners in what they called "Priestblock"  Father's number was 25487.  He wrote about a priest that had newly arrived at Dachau.


One morning Father de Coninck pulls out a cellophane bag labeled "vitamin C" from a fold in his shirt.  In the good old days it was possible to buy such vitamin pills at the camp store.

Through the cellophane the shimmer of a piece of consecrated Host was visible, barely half an inch long.  We all had difficulty hiding our excitement.

"Don't give us away", said de Coninck.  "A German priest from barrack 26 has sent the Lord to us."

We decide to keep this most precious treasure among us for the time being and then to divide it among ourselves for the day when each of us is put on a transport.

Those were days of celebration.  Now when we spoke the prayers of the Mass together, Father de Coninck held the Host inconspicuously in his hand.  How much consolation that brought to the hearts of the tormented priests, how much courage and readiness to sacrifice, cannot be expressed in words.

Priestbock 25487: A memoir of Dachau by Jean Bernard, Zaccheus Press

Father Walter J. Ciszek was an American priest who was convicted of being a "Vatican Spy" by the Soviet communists.  H spent 23 agonizing years in their prisons and in Siberia.  He has written books about his experiences.  His well-known book He Leadeth Me tells on how much the celebration of Mass meant to him and the other priests, who sacrificed beyond belief the privilege of celebrating or participating in the Holy  Mass.  Father wrote:


Sometimes I think that those who have never been deprived of an opportunity to say or hear Mass do not really appreciate what a treasure the Mass is. I know, in any event, what it came to mean to me and the priests I met in the Soviet Union;  I know the sacrifices we made and the risks we ran in order just to have a change to say or hear Mass.  When we were constantly hungry in the camps, when the food we got each day was just barely enough to keep us going, I have seen priests pass up breakfast and work at hard labor on an empty stomach until noon in order to keep the Eucharistic fast, because the noon break at the work site was the time we could best get together for a hidden Mass.  I did that often myself.  And sometimes, when the guards were observing us too closely and we couldn't risk saying Mass at the work site, the crusts of bread I had put in my pocket at breakfast remained there uneaten until I could get back to camp and say Mass at night. Or again, during the long arctic summer, when the work days were the longest and our hours of sleep were at a minimum, I have seen priests and prisoners deprive their bodies of needed sleep in order to get up before the rising bell for a secret Mass in a quiet barracks, while everyone else clung to those precious extra moments of sleep.  In some ways, we led a catacomb existence with our Masses.  We would be severely punished if we were discovered saying Mass, and there were always informers. But the Mass to us was always worth the danger and the sacrifice; we treasured it, we looked forward to it, we would do almost anything in order to say or attend a Mass...."

He Leadeth Me:  An Extraordinary Testament of Faith by Walter J. Ciszek, S.J. with Daniel Flaherty, S.J., a Doubleday, Image Book


Cardinal Francis Xavier Nguyen Van Thuan of Vietnam was also imprisoned by the communists in his own country.  He spent thirteen years as a political prisoner and most of that time, he spent in solitary confinement.  Yet he was able to celebrate Mass!  The Cardinal wrote in Road of Hope:

"I will never be able to express my immense joy: Every day with three drops of wine and one drop of water in the palm of my hand, I celebrated my Mass.

On September 8, 1955, the press around the world reported in shock the overnight arrest of Bishop Kung along with more than 200 priests and Church leaders in Shanghai. Months after his arrest, he was taken out to a mob "struggle session" in the old Dog Racing stadium in Shanghai. Thousands were ordered to attend and to hear the Bishop's public confession of his "crimes." With his hands tied behind his back, wearing a Chinese pajama suit, the 5-foot tall bishop was pushed forward to the microphone to confess. To the shock of the security police, they heard a righteous loud cry of "Long live Christ the King, Long live the Pope" from the Bishop. The crowd responded immediately, "Long live Christ the King, Long live Bishop Kung". Bishop Kung was quickly dragged away to the police car and disappeared from the world until he was brought to trial in 1960. Bishop Kung was sentenced to life imprisonment.

How many more heroic priests falsely imprisoned for the Faith, continue to adore our Lord and the celebrate the Holy Mass.   One such priest is Father Gordon MacRae.  Most of my readers know the story of his long imprisonment.  He has written extensively about life behind bars. I wanted to share with you about his spiritual life in particular.

Toward the end of that first five years in prison, a new chaplain arrived, a Catholic deacon. A few weeks after his arrival, I was summoned to his office. He wanted me to read a presentation on Eucharistic Adoration that he had written for the diocesan diaconate program. I sat in his office dutifully reading his essay. When I looked up at one point, I noticed a small wooden tabernacle on a shelf in the corner of the office. The tabernacle was hand carved by a Catholic prisoner, and was incredibly beautiful.

Sitting there with the deacon’s essay in my hand, I noticed a small Sanctuary Lamp that was lit. I realized with a great jolt that the Blessed Sacrament was in the tabernacle in the deacon’s office. I felt overwhelmed, and tears came to my eyes. For the first time in over five years, I was in the Presence of Christ in the Blessed Sacrament. The chaplain smiled, apparently thinking that I was reacting to his essay.

Father Gordon MacRae's blog: These Stone Walls: The Sacrifice of the Mass: Part I

So my friends, let us remember to never take for granted this immense privilege we have so readily available to us.
Posted by EC Gefroh Posted 5:12 AM

Thank you for taking the time to share these stories of faithful priests.