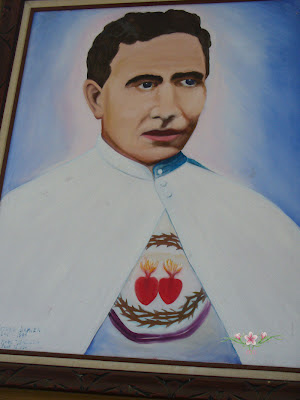 "There is no more doubt about me, I am a leper.  Blessed be the Good God!  Do not feel sorry for me.  I am perfectly resigned to my lot.  I ask only one favor of you; send someone to this tomb to be my confessor..."

"I would not be cured if the price of my cure was that I must leave the island and give up my work."

Words spoken by Father Damien to two priests in 1885.

The Vice-Provincial of his Congregation reported in 1888:

"To my utter amazement I saw him on his new church which he was roofing, giving orders to masons, workers, and carpenters.  And yet he has the appearance of a real leper, his face puffed, h is ears swollen, his eyes bloodshot, and his voice hoarse.  But that doesn't discourage him. He is happy.  He works as though he were not sick at all, and he'll only stop when he drops."

"On April 15th, 1889, Father Damien de Veuster, SS.CC., died with a smile on his face, 'like a child going to sleep.'  He was buried under thePandanus tree, where he spent his first night on Molokai..."

I was able to bless the kids with the relic medal you gave us. The kids loved it. Thank you.

Mahalo John! That is so nice that you did that. Please give my warmest regards to your dear family.

Happy Feast Day Esther. Fr. Damien is a great saint. He lived the gospel message, Love one another as I have loved you.