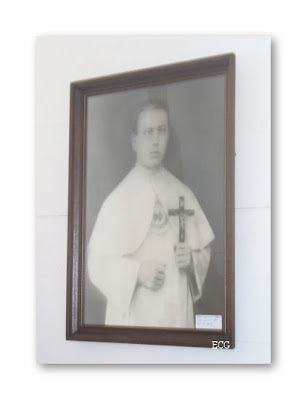 The following description of his first days were written by Father Damien in June, 1886:

"About eighty of the lepers were in the hospital; the others, with a very few kokuas (helpers), had taken their abode further up toward the valley.  They had cut down the old pandanus or punhala groves to build their houses, though a great many had nothing but branches of castor-oil trees with which to construct their small shelters.  These frail frames were covered with ki leaves or with sugar caen leaves, the best ones with pili grass.  I myself was sheltered during several weeks under the single pandanus-tree which is preserved up to the present in the churchyard.  Under such primitive roofs were living in the most revolting promiscuity, without distinction of age or sex, old or new cases, all more or less strangers one to another, these unfortunate outcasts of society.  They occupied their time by playing cards, hula (native dances), drinking fermented ki-root beer, homemade alcohol, and with the sequels of all this.  Their clothes being far from clean and decent, on account of the scarcity of water, which had to be brought at that time from a great distance.  Many a time in fulfilling my priestly duty at their domiciles, I have been compelled to run outside to breathe fresh air.  To counter-act the bad smell, I accustomed myself to the use of tobacco, an and on many occasions the smell of the pipe was my preservation, and saved me from carrying in my clothes the noxious odor of the lepers..."