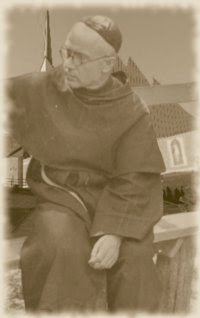 I left a comment on Father's most recent post letting him know that some people leave not-so-nice comments when I try to enlighten readers on Father's innocence. These comments are anonymous and I therefore delete them.

In response to my comment, Suzanne, one of the lovely ladies who is Father's right hand with regard to his blogging, send me the following comment. I have her permission to share it with you.  Mahalo, Suzanne and Jeremy!

There is a lot more to the story of Father Gordon MacRae than you know. I want to tell you about the real Gordon MacRae. I spent five years in prison with him, but we didn’t know him as Father anything. Just G. I was 19 years old when I went to prison and most people thought I was 16 or 17. Every young kid in prison is very aware of predators and prison is filled with them. A tiger can’t change his stripes and a man who is a predator on the streets can be a monster in prison.

G is far from a predator. He was the only person any of us could trust. He treated with nothing but care and respect and challenged us to leave prison better than when we came in. In all those years I never saw, heard, or felt anything that made me believe G ever belonged in prison.

There’s something else you need to know. There was this big, tough man on our cell block who everyone feared. I was a pretty tough kid and could handle myself , but one night this guy told my roommate to be somewhere else. Then he came in my cell and demanded something despicable from me. When I refused he dragged me from my bunk and started beating me. I fought but was no match for him and he pinned me to the floor. All the upstanding convicts fled to their cells and blocked their ears.

Then the beating stopped and i realized someone else was in the room. It was G. The man stood up and demanded that G leave. G just said, “I don’t jump on your command.” Then this beast just lunged at him, but G stood there and didn’t move. When this guy saw that g wasn’t backing down he walked past G and left. G made sure I was okay. This man never came near me again. He never even looked at me again.

I am out of prison today because of G. All I learned about courage and integrity and honor I learned from G.
Jeremy

Esther,
Father Gordon MacRae is in a prison in the state where I live. There are many, many, people who believe he is innocent and I am one of them. This story just confirms my belief in his innocence. He is in my prayers. His plight reminds me of Jesus when He was falsely accused. I have often wondered whether he could have visitors but I realize that he has no clue who I am. I'm going to try to send him a letter, though, in hope that it gives him some small measure of comfort to know that there are many of us who believe in his innocence. Thanks for posting this.

Thank you, Esther, for posting this. You are a good woman.

Mary and Veronica, please keep him in your prayers.
God bless you both,

I didn't know anything about this - ty!!!

Jeannee, if you go on Father's website, his whole story is there.