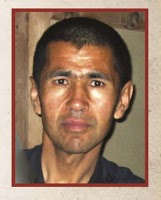 Sister Lisa has a powerful post today regarding the torture being inflicted on Said Musa and his sentence of death. His picture is the one above. His crime? He believes in Jesus Christ. He has written an open letter to President Obama begging for help. The Definition of Christian Faith - the Cross.

Lisa Graas has a prayer request for a CBS correspondent who was covering the protest in Egypt when she was separated by her crew. She was then sexually assaulted and brutally beaten. Prayer Request for CBS Correspondent Lara Logan.

Michelle Malkin also posted about the attack on Lara Logan. Her post revealed her anger toward the attackers. At one point she wrote: "Damn the animals who are responsible. Damn them." CBS News Reporter Lara Logan Sexually Assaulted and Beaten in Cairo The comments left there will no doubt be angry as well.

I guess it is a normal human reaction to be outraged and angry when we hear of horrific stories like these which seem to be happening almost on a daily basis somewhere in the world . But damning them to Hell is wrong.

What we must do make others aware of the plight of Christians like Said.  More importantly, we must pray. Many will scoff at this simplistic solution. But really, who can help the innocent people suffering at the hands of a fanatical society or a frenzied mob? We certainly cannot. But God can. It may seem like our prayers are not being heard but God hears them.

Please, please, please....do not forgot our suffering and persecuted brothers and sisters. Pray for them. Pray for Said and other Christians. Offer up sacrifices for them.  Even with all our prayers and sacrifices, they may still be called to be die for the faith.  We can pray that God strengths them during the cruelest times of sufferings.

As difficult as it is for me to suggest this to you but we need to pray for the conversion of the persecutors.

It seems there are more Christians dying as martyrs now.  I am sure God permits all this suffering for a reason.  I have no idea why.


Said Musa and other persecuted believers may be called to martyrdom and we may not ever be called to be a martyr.  Yet we are all Christians first.  Let us remember what it really means to be one.
Posted by EC Gefroh Posted 3:14 PM