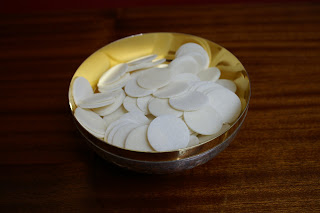 The other night I had a very vivid dream.

I dreamed Mass was being celebrated at the Cathedral and the faithful were moving up the aisle to receive Holy Communion. There was a visiting priest celebrating the Mass and an Extraordinary Minister of Holy Communion present there also. Yet, the Ciborium containing the consecrated Hosts, was placed in the middle of the altar so that the people could reach in and get their own Communion. It was a sort of self-serve Holy Communion.

I was aghast especially when I realized there was a priest and an EMHC there who could give Communion to everyone. Then it dawned on me...I was also an EMHC! I then took the Ciborium and gave out Holy Communion to the rest of the faithful.

Then I went to the tabernacle to place the Ciborium in it. I found that there was now a combination lock on it and I did not know the combination. Frantically, I searched for the pastor, who in reality is the pastor of a neighboring church. I was encourage to see that he was upset by what had just occurred in the church.

Then I woke up.

Interestingly, I recently resigned from serving as an EMHC at our parish church. One reason for my doing so is that I feel that we have sufficient EMHCs (or maybe too many) at the Mass that my family and I attend.

Yesterday, I was asked to substitute for one of the EMHCs who did not make it to that Mass.

Strange how that that happened after that particular dream and after I had asked not to be assigned as EMHC in the future. Is God trying to tell me something?
Posted by EC Gefroh Posted 9:08 AM

I do believe the Holy Spirit can speak to us in our dreams; ask Joseph, he will concur! Pray, but the message seems clear. Your devotion to Him in the Eucharist is a light for those you serve. Have you shared this with your pastor?

That is true David. No, I did not share it with my pastor. I thought about it though.

Wow!!! What a dream. God sure speaks in mysterious ways.

Carnival: He sure does.

God indeed speaks through dreams. In 1990, Jesus came to me in a vivid dream and said, "Everyone has two destiny's in life." He then said, "Come and follow me for I have much to accomplish."

After awakening from the vivid dream, my life began to change slowly through conversion.

In 1991, I witnessed the Miracle of the Sun in northern New Jersey. During the miracle, I had a life-changing spiritual encounter with Jesus Christ. My testimony can be read on my website by visiting http://www.christian-miracles.com or at http://lenarpoetry.blogspot.com/.

Because of my own spiritual conversion, the Lord guided me to sharing His good news with others. As a result, my website and blog publicizes news reports of signs and wonders arising from Jesus Christ. Without question, Our Lady is also very instrumental in spreading God's word with her apparitions unfolding throughout the world.

God is indeed spreading the good news through evangelization.

Thank you Loci for sharing your calling with us here and especially at your blog.