Newspaper: Damien of Molokai film from Vatican archives shows reality of the saint 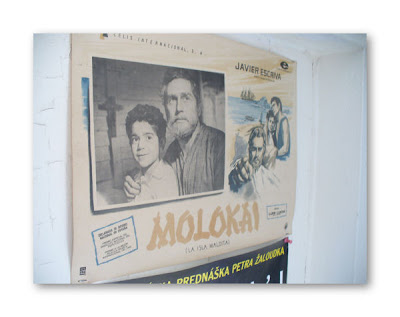 The above poster can be seen at the St. Francis Church's visitor center in Kalaupapa. A big mahalo to Carlos for sharing the story with me.


A newly digitized 1950's film on Fr. Damien of Molokai still offers a relevant message for today, remarked L'Osservatore Romano (LOR) on Friday. According to the Vatican newspaper, the film’s images not only show us the priest's life, but reveal "timeless and fundamentally human themes."

Titled “Molokai, la isla maldita" (Molokai, the damned island), the black and white film was made in 1959 by director Luis Lucia. It won awards in Spain for best film and for best director. LOR reported that the now-digitized movie is of interest not only to the library, as one of the first films filed in its film archives, but also to religious cinema as a whole.

Using the cinematic techniques typical of religious films of the mid-20th century, the film remembers Fr. Damien and his 16 years of work with lepers on Hawaii’s Island of Molokai until his death from leprosy in 1889. The Belgian priest, reported LOR, "represents a universal example of humanitarian aid and solidarity," battling "not only against leprosy but against prejudices."

Read the rest here.
Posted by EC Gefroh Posted 10:51 AM