St. Bernard's Vision of the Angels 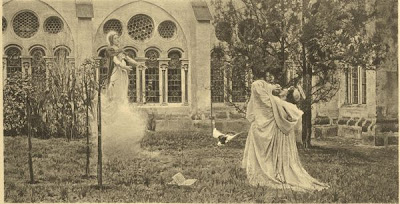 Source for the Vision of St. Bernard


While St. Bernard was in the church one night at matins, he had a vision, in which God made known to him the manner in which the religious were saying their prayers. He saw the angel guardians of the monks standing near them with pens in their hands. Some of these angels wrote in letters of gold, and others in letters of silver. Some were writing with common ink, and others with water, while a few stood sorrowfully, and did not write anything at all in their books.

As the Saint was gazing in wonder at the vision, and pondering in his mind what it signified, an angel said to him: "The religious whose guardian angels are writing in letters of gold are those who say their prayers with great attention, and are full of Divine love. Those whose angels are writing in silver letters love God well, and pray with great attention, but are less fervent and less perfect than the others. Those whose guardian angels are writing with ink have, indeed, a certain desire to please God, but there is not much fervor in their souls; while those whose angels are writing with water are honoring God only with their lips; their hearts are far from Him, and are full of distractions. Those beside whom the angels are standing with sad countenances, and are writing nothing in their books, have already lost the grace of God, and their prayers are only a mockery of Him."

The holy man made known to them in the morning what he had seen. Those who were fervent were encouraged to persevere, and those who had become negligent were aroused to serve God more faithfully.