The Wearing of Purple - 37th Anniversary of Roe v. Wade 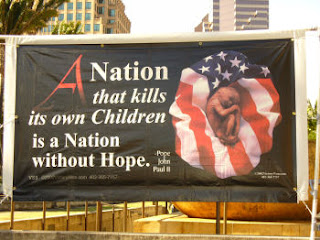 My first impression on seeing our priest vested in purple was "Father, must be confused".  No, Father P was far from confused.

During his homily he explained to others like myself who were clueless, that he was wearing purple in commemoration of the day that abortion was made legal in the United States. 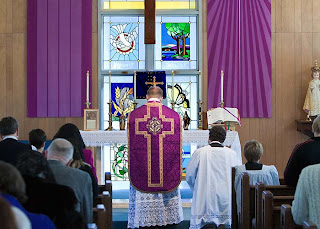 Purple in the liturgical sense stands for penance and purification.

The United States must purify herself for the great sin of abortion and do many, many penances.

Father then went on to talk about how even though Christianity has some things in common with Islam, such as their great respect for Jesus and His Virgin Mother, the reasons Muslims is at war with America is because in their eyes we are going against God's laws, we are the infidels.  We are a nation that kills it own children.  We are a nation that wants to legalize and normalize homosexual marriages.

Let this be a wake up call to us Christians living in the United States.  Protect and defend what is sacred and that begins with the unborn and with the sacrament of marriage.
Posted by EC Gefroh Posted 8:32 AM

I didn't know that either Esther. I wonder if this will catch on around the country?

I wish my pastor would have done that. He didn't mention r v. w at all today and he wore the red vestments in honor of the feast day of St. Vincent de Paul.

Tracy, I thought so too. TY.

Anne, that is too bad.