ACN - Faith and fear in Pakistan 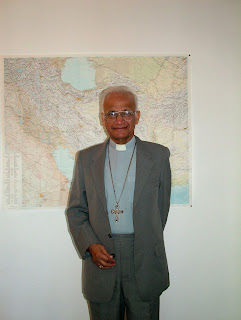 The leader of Catholics in Pakistan has reported that those attending Christmas Mass went through makeshift security barriers on their way into church as part of a huge security clampdown aimed at stopping attacks on Christians.

A massive government security operation was implemented in churches across the country according to Archbishop Lawrence Saldanha of Lahore, who said that the faithful were frightened of being targeted by suicide bombers over Christmas.

In an interview in which he praised police for their response to the threats, Archbishop Saldanha told Catholic charity Aid to the Church in Need (ACN) that Mass attendance was in some places up to 40 percent down from normal. But he went on to say that those who did go to church were “very strong in faith” and refused to be deterred by the security risks.

Speaking from Lahore to the charity for persecuted and other suffering Christians, the archbishop said, “There was a wonderful atmosphere in the churches. People were determined to celebrate and they participated with great enthusiasm.”

The archbishop, who is President of the Catholic Bishops’ Conference of Pakistan, said that “a sophisticated security apparatus” was put in place at in a number of churches in Rawalpindi, outside the capital, Islamabad, including St. Joseph’s Cathedral.

Mass-goers lined up before being checked by police using metal detectors and other security devices. Elsewhere, the faithful were protected by uniformed and plain-clothes police stationed at churches across the country.

In some areas, services were scaled down and after-Mass festivities, including fairs and other community celebrations, were cancelled to reduce the security risk. Christmas functions in non-religious buildings such as hotels and schools were also cancelled or scaled back following police advice.

Congratulating the security services for ensuring the Christmas liturgies passed without incident, Archbishop Saldanha said, “The police protection was really very good….It wasn’t just the size of the security presence; it was the fact that there were a higher number of police commanders than usual. The whole operation was well resourced.”

The stepped-up security comes after the country was put on red alert following a series of attacks across the country. About 90 people in the north-west were killed in an attack on a volley ball game on Thursday (Dec. 31st, 09). The incident came a few days after attacks in the coastal city of Karachi left 30 dead, almost the same number who died in an attack on a mosque in Rawalpindi a month ago.

Archbishop Saldanha underlined the fear of the country’s three million Christians. He said, “Morale here has been very low. For many people, the security apparatus meant that going to Mass was very cumbersome. There were big queues of people getting into church, all standing in single-file. Many people were very worried for their safety.”

He said the threats were, in many cases, based on unsubstantiated rumors, spread by text message. “We told people to stop texting messages of this kind. It was obvious that this was spreading a sense of panic.”

The archbishop added that the security was heightened in response to threats of attacks linked to the Shiite Islamic holy day of Ashura, which this year took place very close to Christmas. Extra-tight security in Rawalpindi was linked to the nearby Army headquarters, he added.

Archbishop Saldanha went on to thank Aid to the Church in Need for its ongoing pastoral support and the prayers of the charity’s friends and benefactors.

Pakistan is a priority country for ACN information and action. In 2008, the charity gave over $500,000 for projects including the repair and construction of churches and other Catholic buildings, distribution of Bibles, support for Christian education, help for Sisters, support for transportation needs, and Mass stipends for priests in poor and remote areas.


With picture of Archbishop Lawrence Saldanha of Lahore

Your browser may not support display of this image.