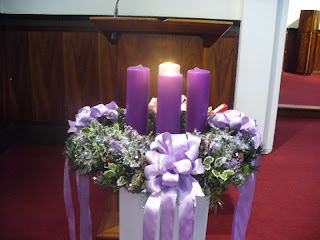 
The season of Advent has a twofold character, a double meaning. Advent prepares us for Christmas, the celebration of Christ’s first coming to us. And it also reminds us to direct our minds and hearts to be prepared for Christ’s second coming at the end of time.

In Christian usage the word “advent” (adventus) has a special liturgical significance, but the origin of the word is pagan.

At the time of Jesus’ birth the pagans observed a manifestation of their pagan divinity that came to dwell in its temple at a certain time each year. This pagan feast was called advent, and it marked an anniversary of the return of their pagan god to the temple. During this special time the temple was open. Ordinarily the temple was closed.

In the days of the Roman emperor, advent also celebrated the coming of the emperor.

The word “advent” was suitable to describe the coming of the Son of God in the temple of his flesh. Gradually the use of this word was limited to describe the coming of the Lord. This advent, the coming of the Lord and the anniversary of his birth, replaced the advent and birth of the unvanquished sun of the winter solstice. This use of the word “advent” gained prominence during the reign of the Emperor Constantine (306-337). To grant tolerance to all religions and to allow the open practice of Christianity, he issued the Edict of Milan in 313. As Christian feasts were adopted and celebrated, pagan festivals were soon replaced and forgotten.

The ancient idea of advent underlies the prayers of Advent that call forth the coming of the Lord, often with the same image of the temple.

Now Advent signals a time to prepare for Christmas, the celebration of the first coming of the Lord. But the prayer texts and Scripture readings of the Sunday Masses and the Liturgy of the Hours give ample attention to the second coming of the Lord to which we look forward.

In reality the three distinct accents of the Liturgy of the Advent season are defined by the three comings of the Lord: yesterday, at Bethlehem, when the Son of God was born of the Virgin Mary; today, in our world, where he is incarnate in the Church, in the sacraments, and in the faithful baptized into grace; tomorrow, when he returns in glory.

This, then, is the rich meaning of Advent. From the beginning of the liturgical year we celebrate the whole panorama of the mystery of salvation history.

The variety of this season is not only desirable, it is truly appropriate because Advent is oriented toward the one who has come once for all, who is coming, and who will come.
Posted by EC Gefroh Posted 12:27 PM

A blessed and prayerful Advent to you!

Thank you Mimi. Same to you.