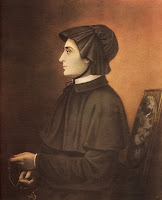 Picture has been changed because an observant reader questioned whether the previous picture was indeed Mother Seton or Mother Cabrini. After closely looking at it, I think she was right...it was Mother Cabrini. Mahalo Patm!

Fr. Paul gave a wonderful little homily on Mother Seton today at Mass. He talked about how she was an Episcopalian who converted to Catholicism mostly due to the good influence of her Italian friends in Italy...her love of the Eucharist...that she was a wife...mother of 5 children...then widow....how she started an order, the Sisters of Charity...and how she is also known as an educator because she started the parochial Catholic school system in the United States, and how she is the first American born saint.

But what captured my attention most of all is when he told us that she was at George Washington's Inauguration and how she even danced with President Washington at the Inaugural ball!

Fr. Paul is also from New Jersey which explains his admiration for this particular saint, who is very big on the East Coast... She hails from New York after all. He mentioned that Seton Hall University in South Orange is named for her. He also mentioned that the Sisters of Charity are still in New Jersey. In fact, the mother house is in Convent Station. A very beautiful place to visit if you have a chance. Our dear friend and my sisters' 6th grade teacher Sr. Lucy Mary Sullivan resides there.

And to all you families with children in parochial schools or who use the Seton Home Study Curriculum for homeschooling...HAPPY FEAST DAY!
Posted by EC Gefroh Posted 8:30 AM

The Sisters of Charity are still a thriving order! Isn't that wonderful? We owe them a debt of gratitude in our family, as our oldest son was born in one of their hospitals, and had to be in the NICU for two weeks. We were struggling college students at the time,and the Sisters reviewed our case and wrote off our entire debt. Deo Gratias! That would have been an awful burden to begin our married life with. We have promised to somehow "repay" them someday and are just waiting for the signal. ~St. Elizabeth Ann Seton, pray for us!

Esther, what a beautiful card!

Is that Mother Seton, though? Looks more like Mother Cabrini. Elizabeth Seaton wore a black cap with a big bow under her chin.

What a beautiful story Lisa! They also run the Catholic hospital in my hometown.

Thanks Easter but wrong saint :-)

It's a lovely story, isn't it? It gives wives and mothers as well as Sisters and Eucharistic Adorers much to reflect on.
May Mother Seton pray for us all.

Veritas, you are so right!