Feast of the Immaculate Heart of Mary 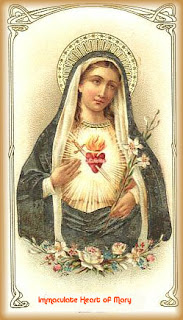 The link between devotion to Mary's Immaculate Heart and the Sacred Heart of Jesus is shown in the following passage:

"...a short time after Pascal had carried out the first experiments in modern physics and Descartes had perfected the mathematical instruments which would make possible the development of the sciences, Jesus appeared to an obscure nun and, showing her his heart, said to her: 'This is the heart that has so loved men.'

"Then, as men did not listen to the message of Paray-le-Monial and the corruption of the world continued, the Virgin Mary appeared to the children at Fatima; she showed them her heart and said: 'The Lord wishes to establish devotion to my Immaculate Heart in the world. If what I say is done, many souls will be saved and there will be peace.'

To read about Devotion to the Immaculate Heart of Mary, click HERE for the Theotokos's site. Thank you Donal!
Posted by EC Gefroh Posted 4:37 PM