Feast Day May 10th
"There is no greater love than this: to lay down one's life for one's friends." 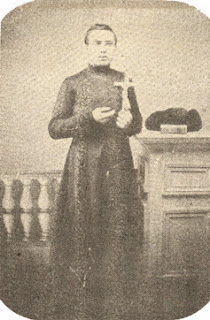 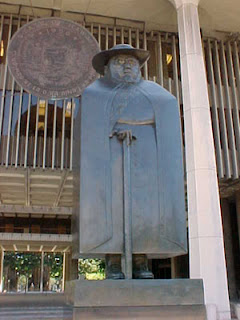 Hawaii is proud to claim Father Joseph de Veuster or Damien or Kamiano, as one of our very own saints (or soon-to-be canonized) along with Blessed Mother Marianne Cope.

By now the world knows about this young man from Belgium who came to Hawaii, taking his sick brother place. Once here he was ordained a priest of the Sacred Heart Fathers. He was actually ordained at our Cathedral in downtown Honolulu.

He volunteered to go to a remote part of Molokai where the people infected with the dreaded "Leprosy" bacteria...Hansen's disease... were forced to go. He arrived in a place where the inhabitants greeted him with ""Aole kanawai ma reia wahi" -- "In this place there is no law" ..."

He soon made it a decent place to live. He built a church and a home for children. He made it a home for the people who felt abandoned by society, separated from their families by force, and actually gave them hope.

He had to fight for supplies and other necessities. He humbly confessed his sins by shouting them to the priest on the ship because he wasn't permitted on board.

Soon after, he contracted the dreaded disease himself. He gave up his life for the love of his neighbor.

Even after death, he was viciously attacked by a Reverend Hyde, who accused him of all sorts of indiscretions as an explanation for him contracting Hansen's Disease.

However, the famous writer Robert Louis Stevenson, came to Father Damien's defense in a famous letter he wrote to Rev. Hyde. LETTER

To read more about Father Damien, I would recommend Damien the Leper by John Farrow, or watch the movie Molokai, the Story of Father Damien, starring David Wenham of the Lord of the Rings fame.
Posted by EC Gefroh Posted 8:23 PM

I LOVE Father Damien!
(AND RL Stevenson.)
Thanks for posting.
I love to read this every year.
:)

In "Hawaii" James Michner bases a character on Father Damien, and I enjoyed it very much.

What a wonderful Hagiography, thank you!

What a fascinating post! Thank you so much for sharing this, it was vey informative.

I enjoyed reading this post, too, Esther. Blessed Damien is a such a beautiful model of sacrificial love. I thought of you as Father was giving his homily at Mass today on Blessed Damien. Thanks for postin this fascinating info on his life.

Spelling correction for the above "posting" instead of "postin".

Mimi: I love the book but I never finished reading it. Now I will.

Deb: My pleasure! I am in awe of all the people who love Fr. Damien!!

Thanks Jean! I will have to post on the festivities today.

Thanks PB, I took care of it already :-)