The Chasms of Hell 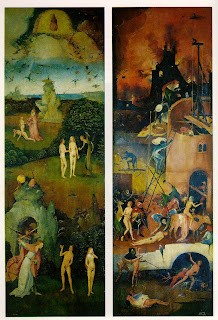 A painting by Hieronymous Bosch, c.1510, portraying Hell on the right.

The following is from Notebook II of the Diary of St. Faustina, page 296, paragraph 741

"Today, I was led by an Angel to the chasms of hell. It is a place of great torture; how awesomely large and extensive it is! The kinds of tortures I saw:

First torture that constitutes hell - is the loss of God;

Third torture - is that one's condition will never change;

Fourth torture - is the fire that will penetrate the soul without destroying it - a terrible suffering, since it is a purely spiritual fire, lit by God's anger;

Fifth torture - is continual darkness and a terrible suffocating smell, and, despite the darkness, the devils and the souls of the damned see each other and all the evil, both of others and their own;

Sixth torture - is the constant company of Satan;

These are the tortures suffered by all the damned together, but that is not the end of the sufferings. There are special tortures destined for particular souls. These are the torments of the senses. Each soul undergoes terrible and indescribable sufferings, related to the manner in which it has sinned. There are caverns and pits of torture where one form of agony differs from another...Let the sinner know that he will e tortured throughout all eternity, in those senses which he made use of to sin. I am writing this at the command of God, so that no soul may find an excuse by saying there is no hell, or that nobody has ever been t here, and so no one an say what it is like." 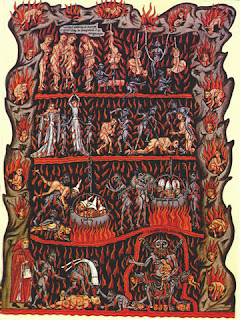 This one is a medieval painting depicting Hell.
Posted by EC Gefroh Posted 8:55 AM