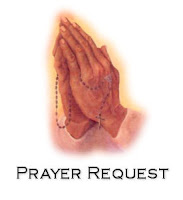 The following is from an email from Sue, the kind lady who shares many of the quotes I post.


Please pray for the Dominican Nuns of the Perpetual Rosary in Union
City, NJ. They are a small Order and at this point, will have to
close in the next 6 months if they don't get vocations. The Sisters
do not have a web site or email address. In speaking with
sub-Prioress, Sister Carol, she shared that if they don't get the
vocations they need to continue, they will merge with another
Order. Please pray with me that if it is God's will that they merge,
that He will clearly lead them to the right community, and if He
wants them to remain, He will make their community irresistible to
those discerning a vocation, and right away.

Here is their address and phone
number:

Please pray for the Sisters.

Through Him, With Him, In Him,
Sue

Oh Lord, please bless this order of nuns and may your most perfect will be accomplished in them. Please hear their prayers and provide for them.

Thanks for your prayers Rosemary.

Post-Easter update, Monastery of the Perpetual Rosary, Dominican nuns, Union City, NJ: I phoned the monastery and spoke with Sr. Carol Marie OP, the sub-prioress, to find out what happens next.
It is resignedly accepted that the Union City foundation must be closed. They received attention within their Order, from a report in MONIALIBUS, the international newsletter of the Second Order of cloistered Dominican nuns (recommended- you can find it online). At the time, the OP promoter of the nuns, fr. Manuel Merten OP, reported on his visitation at Union City. When he visited, Union City had a community of six women. The oldest was over ninety, and had been solemn professed for over sixty years, always at that location. She wanted to remain, die, and be buried in Union City. Other nuns accepted the alternative of moving on and being absorbed into the Dominican nuns of a different monastery somewhere else.
Here is how things stood at Easter this year. Sr. Mary Clare OP, the elderly nun referenced above, died last year and is buried in Union City, so her wish was granted. The oldest of the five surviving nuns is Sr. Mary Gemma OP. Physically too weak to go back and forth through the cloister, she is excused from community events, and confined to her monastery cell. The prioress, Sr. Mary Jordan OP, apparently afflicted with the complications of progressed diabetes, cannot walk. She was graciously admitted to the nursing care facility which the Caldwell NJ congregation of active Dominican sisters reserve for their own elderly and infirm women.
Sr. Mary Charlotte recently hurt herself in a fall. The physicians can no longer be persuaded to visit the enclosure to give first aid to an injured "moniale"/nun. She had to be sent to a hospital and remains there while the nuns wait for the doctor to get the X-rays back from the lab, to determine if Sr. Charlotte has any fractures.
If you are keeping track, we have accounted for four of six women, including the one who went home to her Lord last year.
Sub-Prioress Sr. Carol Marie OP, and Sr. Maria Aquinas OP, at about seventy years of age the youngest in the community, are now the only two able-bodied women in the Union city foundation.
Sr. Carol tells me, that discernment for their community proceeds slowly with many interruptions. Their short list of "next homes" is: Syracuse, NY; Hunts Point, the Bronx, NY; and Lancaster, PA. With each of these Dominican monasteries, one nun from Union City has been dispatched to live with them in the cloister for a period of two weeks, then return to her house and disclose to her sisters what she observed.
Obviously, illness and injury complicate and delay the process by which Union City must be closed, and the surviving nuns absorbed into another monastery of the Second Order of St Dominic's Order of Preachers. Please, keep these nuns in your prayers.

Anonymous: I appreciate you taking the time and trouble to update us on the Sisters. I will post an update with your comments. Thank you.

I have been to this monastery and it is a beautiful place of prayer; an oasis of peace. It is sad that they are not getting vocations and I hope they do not close. They are the first dominican monastery in the USA! why don't other monasteries send sisters there as they once sent nuns to found other monasteries.

That's a good idea anonymous. I hope everyone remembers to pray.

Peace be unto you and may Mary ever be a Mother unto us.
As of this post, 9/27/2010, all the nuns are gone from the former Blue Chapel with the woman who runs the gift shop coming in occassionally.
Last year, a proposal was brought to an assembly of community residents to convert the Blue Chapel to a home for unwed mothers. The architect who was present revealed that the footprint of the building would change, the perimeter walls would go in some cases, and 3 stories would be added. The residents vocally objected and the plan is on hold for the time being.
Local preservationists are trying to convince local leaders in Union City, especially the mayor, to attempt to get the former building protected to a limited extent on the New Jersey Registry of Historic Places. So far the church authority, as I understand, is opposed to this and their are hints that the entire property of just over 1 acre will be sold. But that is unconfirmed at this point.
The Union City Reporter, available on-line, has at least 3 articles about the Blue Chapel to date.
Meanwhile a sister monastery in Summit, New Jersey continues.
The Blue Chapel consistently lost nuns over several decades and they are interred in a small cemetery on the grounds.
Perhaps the best known nun was the late Sr. Mary of the Compassion (Constance Mary Rowe)who was artistically gifted.
Please continue to pray for those nuns who still survive but have been relocated due to age and infirmity.
Pax Christi

Thank you so much for the latest updates. I will search for the articles to share. I will also be praying for the nuns.
God bless,