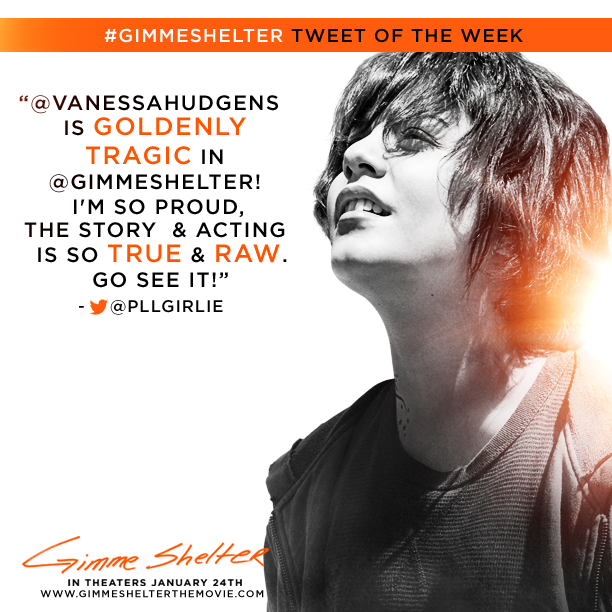 On January 24th, the week of the infamous and deadly Roe v. Wade decision,  the movie Gimme Shelter will open in theaters around the country. For many of us pro-life people of faith, we were blessed to have the privilege of watching it last evening. Thanks to the producer of Bella, Jason Jones of Movement to Movement, more and more pro-life, pro-family, and faith-based films will be coming to a theater near us. Thanks to him, we have films like the aforementioned Bella, and also October Baby, Crescendo and pretty soon, you can see his latest project, Gimme Shelter.

This movie has a very powerful beginning. The performances excellently portray violence and abuse due to drug addiction. It was heart-breaking having to see a teen girl feel so unloved, with no where to turn. Actress Vanessa Hudgens gives an amazing performance as Agnes "Apple" Bailey. Another powerful performance is given by Rosario Dawson. She was also the vet in the family film Zookeeper with Kevin James. It was hard to believe that she was the same actress in both films. In this new movie, she plays the drug addicted mother of "Apple".

There are a couple of other well-known actors in the film.  They too brought a lot of emotion to their respective roles.

There was a strong request from the people who brought us this film, to make sure we let others know about them so that they could have people fill the seats when it opens up.  We need to support these types of films.  We need to bring more quality films to our theaters that have a message of hope, a message of love and a message of God.

So please make plans to go to the movies and watch this beautifully filmed movie.

And, lastly, please support your local crisis pregnancy center by either making a monthly donation or volunteering.

On Oahu, there are two that need help: Aloha Pregnancy Care and Counseling Center and Pregnancy Problem Center of Hawaii