SERRA AND THE YEAR OF FAITH 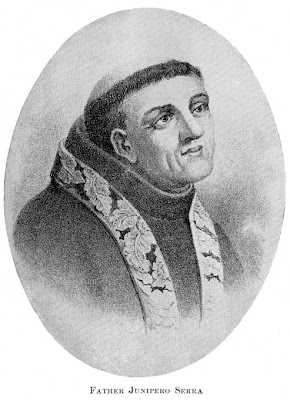 During this Year of Faith we will mark the 300th anniversary of the birth of Blessed Junipero Serra on  November 24.  Blessed Junipero Serra (1713-1784), the first apostle and colonizer of Alta California was a model evangelizer and is a benchmark for the missionary spirit for spreading and renewing the faith in the Year of Faith we are now celebrating.  The church celebrates his feast on July 1.

Although some Spaniards were guilty of abusive treatment, Padre Serra had never been guilty of mistreatment.  On the contrary, he defended them from harm.   In 1784 Father Serra died at Mission San Carlos Borromeo, and later he was buried in the sanctuary of its church. When Pope John Paul II beatified Junipero Serra on September 25, 1988, he praised the Apostle of California as “an exemplary model of the selfless evangelizer, a shining example of Christian virtue and the missionary spirit.”  These are the traits we are challenged to exhibit in this Year of Faith.

Blessed Junipero Serra witnessed to the holiness of the Church and its concern for all people.  As an extraordinary missionary and an exceptional example of the Church’s apostolic calling to preach and exemplify the Gospel to everyone, he personifies the spirit of the new evangelization that characterizes the current Year of Faith.