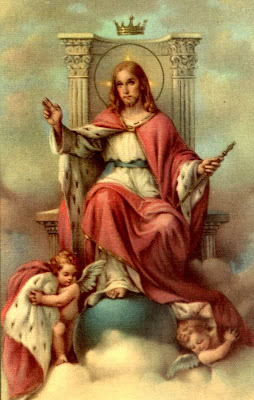 To Jesus Christ, our Sov'reign King,
Who is the world's salvation,
All praise and homage do we bring,
And thanks and adoration.

2. Your reign extend, O King benign,
To every land and nation,
For in your kingdom, Lord divine,
Alone we find salvation.
(Refrain)

3. To you and to your Church, great King,
We pledge our hearts' oblation,
Until before your throne we sing,
In endless jubilation.
(Refrain)


. It has long been a common custom to give to Christ the metaphorical title of "King," because of the high degree of perfection whereby he excels all creatures. So he is said to reign "in the hearts of men," both by reason of the keenness of his intellect and the extent of his knowledge, and also because he is very truth, and it is from him that truth must be obediently received by all mankind. He reigns, too, in the wills of men, for in him the human will was perfectly and entirely obedient to the Holy Will of God, and further by his grace and inspiration he so subjects our free-will as to incite us to the most noble endeavors. He is King of hearts, too, by reason of his "charity which exceedeth all knowledge." And his mercy and kindness[1] which draw all men to him, for never has it been known, nor will it ever be, that man be loved so much and so universally as Jesus Christ. But if we ponder this matter more deeply, we cannot but see that the title and the power of King belongs to Christ as man in the strict and proper sense too. For it is only as man that he may be said to have received from the Father "power and glory and a kingdom,"[2] since the Word of God, as consubstantial with the Father, has all things in common with him, and therefore has necessarily supreme and absolute dominion over all things created...