By now you must have read the news: Vatican brings Hawaii closer to gaining 2nd saint


A nun who dedicated her life to caring for exiled leprosy patients is a step closer to sainthood after the Vatican's Congregation for the Causes of Saints recommended her canonization on Tuesday.

I think Hawaii will be the only state in the union with two saints!


This is wonderful news and I am sure everyone in Hawaii is excited about Bl. Mother Marianne Cope finally that much closer to being canonized.  I must admit it is only recently that I have grown to appreciate the work she did for the Hansen's Disease patients in Kalaupapa.  Before that, it bothered me that Saint Damien, then Father Damien, had so much opposition to his tireless work with those patients.  It also bothered me that it took so long before Mother Marianne Cope and her sisters finally went to help Father Damien.  I realize now how unselfishly she gave of herself.  And, of course, I have a devotion to her too.


"We thank God that the Vatican Congregation for the Causes of the Saints has approved a petition to ask Pope Benedict XVI to officially declare Blessed Marianne Cope, OSF, a saint of the Church. We are particularly joyful in Hawaii, because of Blessed Marianne's worked here, but her example of selfless love can soon be an inspiration to all the world. She was a woman who brought hope and joy to people who had good reason to lose hope and to lament their condition in life. At this time when so many people are losing hope because of our economy and the increased unrest throughout the world, Blessed Marianne inspires us to work simply for the good of others and to allow God to work miracles through the simple things we do. We look forward to honoring this holy woman in our celebrations, and most of all by our faith in the God who begins and sustains every good work among us."

January 23, 1838 - Born to Peter and Barbara Koob (Cope) in the German Grand Ducy of Hesse-Darmstadt

In August, 1862, entered the Sisters of the Third Oder of St. Francis, in Syracuse, N ew York
In 1877, elected Second Provencal Mother of the Syracuse Franciscans


To see the infinite pity of this place,
The mangled limb, the devastated face,
The innocent sufferers smiling at the rod,
A fool were tempted to deny his God.


He sees, and shrinks; but if he look again,
Lo, beauty springing from the breast of pain! -
He marks the sisters on the painful shores,
And even a fool is silent and adores. 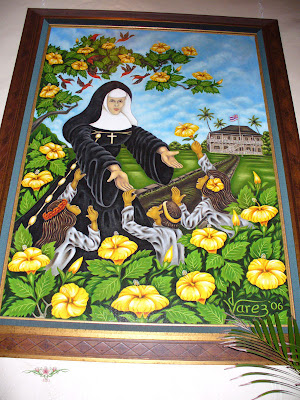 Recommended reading and source of the above is A Song of Pilgrimage and Exile: The Life and Spirit of Mother Marianne of Molokai by Sister Mary Laurence Hanley, O.S.F. and O.A. Bushnell.
Posted by EC Gefroh Posted 12:24 PM

Mimi, it is very exciting!

Esther-I'm from Utica, NY, the city where Blessed Marianne Cope lived in. Her parish church is still around, and there are two shrines to its famous parishioner, both in and outside the church.

I'm so excited that we here in Utica will have its very own Saint!

And I would have take issue with your words, 'Hawaii is the only state in the Union to have two Saints.' Well, New York State has six (St. Elizabeth Ann Seton, St. Frances Xavier Cabrini, St. John Neumann, and the three Jesuit Martyrs of Auriesville, Sts. Isaac Jogues, Rene Goupil and Jean Lalande). And we might get another in addition to Mother Marianne, Blessed Kateri Tekakwitha! (I'm not being mean or anything--I'm just stating the truth! : ) )

Of course, we here in Utica can share Mother Marianne with Syracuse, NY and Hawaii. She belongs to all of us!

Aloha Barb, thanks for your comment. I wasn't sure about the comment I made about Hawaii that is why I prefaced it with "I think". Thanks for clarifying. We in Hawaii feel a close kinship with Syracuse, NY and of course Belgium because of our two saints.