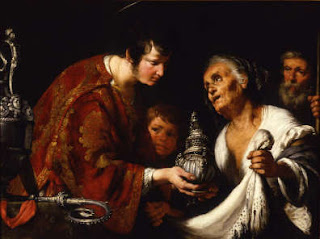 St. Lawrence Giving the Treasures of the Church to the Poor by Bernardo Strozzi
Picture source 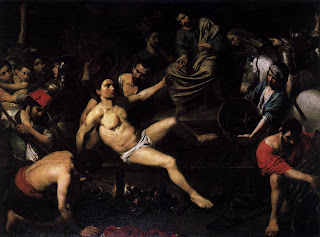 
St Lawrence was a Christian martyr of Spanish birth who died in Rome in 258, one of the most venerated saints since the 4th century. He was ordained deacon by Pope Sixtus II and met his death shortly after the pope's own martyrdom. Tradition has it that the pope, when arrested, instructed Lawrence to give away to the poor the church's treasures, consisting of precious vessels and money, for which, as deacon, he was responsible. No sooner had he done so than Lawrence was ordered by the Roman prefect to surrender them to him, whereupon Lawrence, indicating the poor and sick around him, said, 'Here are the treasures of the Church'. For this he was condemned to be roasted on a gridiron, a torture he underwent with equanimity, merely observing, 'See, I am done enough on one side, now turn me over and cook the other'.

O Generous patron of the Church’s poor, St. Lawrence, pray to the One God, Father, Son and Holy Spirit that all the poor of the Church in need in every corner of the world may feel the effect of the love of their brothers and sisters who seek to help them.

Deliver the Church from the greed and envy of the powerful and protect her rights and property so that she may serve the needy in freedom, giving them good things for soul and body.

May we come some day with all those whom we helped on earth to the bright mansions of heaven where we will enjoy the riches of God’s house and the company of the Savior who lives and reigns forever and ever.

Prayer source: Aid to the Church in Need
Posted by EC Gefroh Posted 9:03 AM