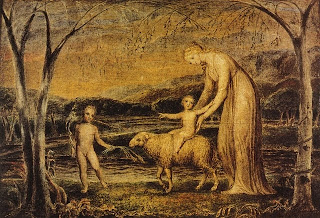 By Brother John M. Samaha, S.M. and used with permission
While the Virgin Mary probably possessed no gold to smooth her life in the household of the Holy Family, she wears a crown of gold that circles the earth.  Flower gardens around the world blaze with golden blossoms that honor her.  Every Marigold is s living memorial to her, a token of veneration and praise.

We have no certainty how this small golden flower was named for Mary.  Perhaps some noble person found it growing in the garden of a Lady Chapel in the 12th century, and was inspired to give it a new name.  Or, missionaries to the Anglo-Saxons may have bestowed that title even earlier.  Or, reverent Normans may have brought an Old French version of the name with them when they attacked Britain from the continent. 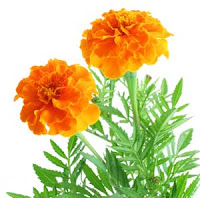 In any event, the name of this flower named for Mary was established early in the development of England as a nation, the England that came to be known as “Our Lady’s Dowry.”  The early origin of the flower’s title is indicated by the variety of ways in which it was spelled: Marygold, Marygowles, Marigolde, and much later Mary’s gold.  Slurred speech eventually shortened the name to a single word -- Marigold.


In the late medieval period both the Dutch and Low German languages included equivalents of the English name: Marienbloemkijn in Dutch, and Marienblome in German.

Why this particular flower was selected to honor Our Lady is unknown.  History does offer a few clues.  Perhaps the most important is that the plant called Marygold frequently appeared in bloom at Ladytide; that is, it bloomed during each of the festivals in honor of Mary.  At that time the flower given her name was the most abundant source of golden blossoms.

Later, botanists gave the plant the formal scientific name calendula oficinalis.  This seemed logical since Marygold was in almost continuous bloom.  It actually bore flowers on most or all of the calendulae, the first three days of the month.  From a botanical viewpoint, it was considered “the calendar flower.”

A native of the Mediterranean region, the plant reached Britain early in the Christian era.  Angles and Saxons gave it guttural names which survived into modern times as “golds” and “rudds.”  But the flower came into prominence only after it was christened as a living memorial to Mary.  Few plants have achieved greater esteem.

Flower petals, both fresh and dried, were used to give color and flavor to many types of soups and drinks.  When Macualay wrote his famous History of England, he described typical rural activities of his countrymen in this way: “They brewed gooseberry wine, cured Marigolds, and made the crust for venison pastry.”  This flower was so widely used as a condiment that is was known as the “herb-general of all pottage.”

Shropshire housewives even made a special cheese from Marygold.  Their base was colored curds of skim milk, about the consistency of cream cheese. Then they added petals of the flower for both color and flavor.


Medieval physicians listed the marigold as a medicinal plant.  Boiled with sugar, it was used both internally and externally.  A medical book dated 1578 declared, “The conserve that is made of the floures of Mary-goldes cureth the trembling of the harte.”  It was also recommended for sprains, wounds, and skin maladies. Even in the wars of the twentieth century, English soldiers were given medicinal oil extracted from modern varieties of the Marigold.

Some superstitions arose, but such practices were local and have long since faded into oblivion.

Present-day scientists are still awed by the Marigold.  Some botanists believe the flower holds the key to a few baffling problems of the plant world.  People of science were interested in the golden flower centuries before it attracted the attention of western Christians. To a degree quite unique among medieval plants, Mary’s gold exhibited a strange sensitivity to light from the sun.  Every farmer and gardener knew the flower opened its half-shut eyes each morning about nine.  For about six hours it slowly turned its head to follow the bright sun.  About three in the afternoon it began folding its petals for another night of slumber.

Early observers had some interesting theories, but no systematic body of facts.  Modern analysts have extended their knowledge of this phenomenon, but still stumble in a corridor enshrouded with mystery.


Today botanists refer to the Marigold’s movement as phototropism (light-turning).  Most, if not all, plants arrange their leaves, blossoms, and stems in response to light.
Conspicuous movements by the Marigold and Sunflower simply dramatize a process taking place more slowly among practically all green-leaf organisms.

If the secret of the marigold could be unlocked, we would know how light energy stretching 93 million miles from the sun influences the movement of plants on earth.   But that riddle may not be solved in our lifetime.

Today few gardeners grow the exact plant to which earlier generations gave Mary’s name.  Related varieties discovered in the New World were brought to Europe in the sixteenth century.  By 1542 it was recorded that only five American plants were established in Old World gardens.  Four of theses were vegetables.  The fifth was the Marigold.  Although it originated in Mexico, it reached England by two different paths -- one passed through Africa and the other through France.  Contemporary flower-lovers usually identify Marigolds into African and French varieties.

No matter what its variety, the Marigold is rich in symbolism of Our Lady.  The gold petals are likened to rays of light crowning her head, and the prodigal color related to the generous giving of herself to God’s plan.

Sometimes described as “the flower of grief,” the Marigold actually weeps on occasion.  Droplets gather in the flower during the night, and drip off like tears when it opens in the morning.  This characteristic moved Shakespeare to write in A Winter’s Tale:
“The Marygold that goes to bed with the sun,
And with him rises weeping.”


Grief mixed with joy, poverty linked with abundance of good gifts -- that is the Marigold’s reflection of the Lady for whom it is named.  If peoples and nations could achieve the spirit of Our Lady, whom this flower commemorates, all life would take on a new meaning and purpose.  This ordinary and humble plant serves as a vivid and perennial challenge to new adventures of mind and spirit in fulfilling the Creator’s design.
Posted by EC Gefroh Posted 9:08 AM