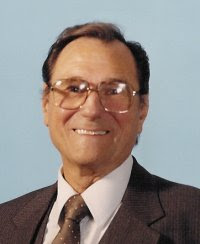 I am finishing up a new book on the life Mr. John M. Haffert. But I did not want to wait any longer to review this fine biography. For those of you who are not familiar with his name, he is the co-founder, along with Monsignor Harold Colgan, of the Blue Army now the World Apostolate of Fatima. 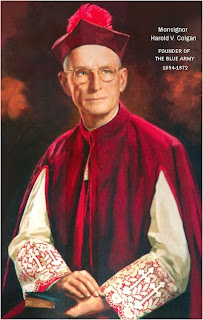 This biography was written by Edna McGrew, a New Jersey based writer.

The main reason I was eager to read Ms. McGrew's new book was because as co-founder of the international World Apostolate of Fatima, John M. Haffert is a very important person for our fledgling World Apostolate of Fatima Honolulu Diocesan Division and because as a long time member of the WAF, I wanted to know everything I could learn about the man behind this renowned apostolate dedicated to our Lady of Fatima.

The book started off with an introduction to the apparitions in Fatima, and some personal background on John Haffert. The first chapter has John Haffert newly married to a lovely woman by the name of Anne.

"...they and their small estate are right out of F. Scott Fitzgerald's stories of the famed gold coast along New York's side of the Long Island Sound..."
But the similarity ends there because this young man was a very devout Catholic, husband, family man and God definitely had plans for him.

It was amazing to find out that a man whose name is almost synonymous with Fatima, was not familiar with the apparitions at Fatima in the very beginning.

I should mention that in order to familiarize herself fully with the subject of her book, Ms. McGrew did extensive research, read almost all, if not all of Mr. Haffert's books (he was very prolific) and conducted interviews.

The result was a very interesting, hard to put down book. I must confess to reading it every single day, before Holy Mass.

Ms. McGrew did not sugar-coat or canonize Mr. Haffert for the reader. No, she presented him as a real, human being who had struggles, faults, just like the rest of us. Yet, this man was a very holy man. His entire life was dedicated to God and His blessed Mother, whether through the Scapular of Mount Carmel or Our Lady of Fatima and the Blue Army pledges, he was determined to enlist more and more people in our Lady's growing army. It was the only way to fight the evils that assailed the world from the beginning of time. He took very seriously the idea that the Rosary and the Brown Scapular were weapons people everywhere, (and not only Catholics) could successfully use against the devil and his demons.

One of my favorite chapters is found almost at the end of the book. It is entitled "Power Players".

I am reluctant to share much on it for fear of spoiling the chapter for you but I know you will enjoy reading the following.


"John believed in the power of prayer and the need for power players. He was convinced that his Marian Apostolate would succeed only through the power of many prayerful individuals. He writes: "I had to find saints. And I made a conscious effort to do so. I cultivated the acquaintances of devout people." 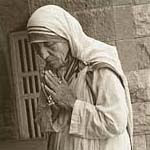 Well, one power player was none other than Blessed Mother Teresa of Calcutta!


"When Mother Teresa heard of the Blue Army, she and all the members of her community, became early members. Not only did she visit the Blue Army Shrine of the Immaculate Heart of Mary in Washington, NJ but she also gave lectures there.

To this day , her community regularly visits the Blue Army Shrine in Washington, NJ.

In addition, Mother Teresa's spiritual director and one of her principal confessors was the late Fr. John Hardon, S.J. whose canonization process has recently been introduced. He spent hundreds of hours giving conferences to the members of Mother Teresa's Missionaries of Charity. In addition, for many years, Fr. Hardon was a chaplain of the World Apostolate of Fatima, Blue Army." (Bold emphasis is mine) 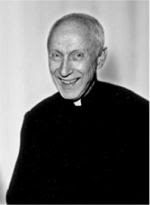 Well, how do you like that? I was so excited when I read this part, I think I interrupted my mom's prayers in Church to show this part to her.

The power player that I really was ecstatic to read about was none other than Saint Padre Pio. 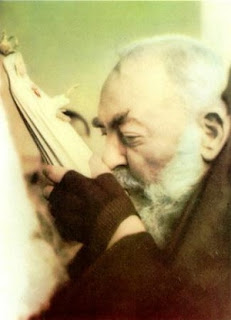 ..."John (Haffert) relates that Padre Pio was asked by one of his celebrated spiritual children, the Marquesa Boschi, whether it was a good idea to join the Blue Army. Padre Pio replied: 'This is not only an act of prayer -- it is also an apostleship. What better thing could you do?' John goes on to say that many people wanted to be Padre Pio's 'spiritual child'. But he did not accept all who asked because Padre Pio had promised: 'I shall stand at the gates of Paradise and shall not enter until all my spiritual children have entered.'

One day Msgr. Colgan asked Padre Pio if he would accept members of the Blue Army as his spiritual children. Padre Pio agreed but he stipulated: 'that they behave well.'

John and Msgr. Colgan interpreted this to mean that the Blue Army members should live up to their commitment. John considered Padre Pio to be the 'spiritual Father' of the Blue Army because of this promises that he made."

So you can see why I was so excited and ecstatic at reading about Padre Pio, the Blue Army Shrine and being his spiritual child!

Well, I think I had better let you read the rest of the book for yourselves.

I truly and highly recommend this wonderful book to everyone but especially those who are members of the Mary's Blue Army and those contemplating becoming a member.

The book is available at the following: Infinity Publishing toll free at (877)-289-2665. You can also order the book and/or get more information at their website: here

Also, you can find more information and read excerpts from John Haffert's biography on Edna McGrew's website:
Posted by EC Gefroh Posted 10:58 AM

This sounds like a wonderful book, Esther! Your review makes me want to read it. Fatima, Padre Pio, Blessed Mother Teresa of Calcutta, and the Blue Army -- what a great combination!

I think you will really enjoy it Jean.