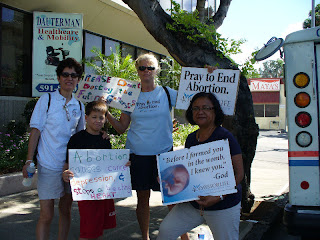 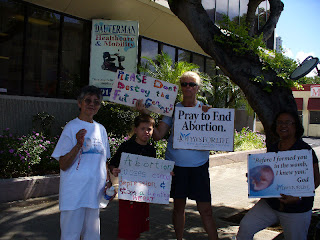 This morning a group of Catholic moms got together and held an hour vigil in front of Planned Parenthood. It was the first time for a couple of them. The plan was to pray the entire Holy Rosary during that hour. As you all know the old saying "If you want to make God laugh, tell Him your plans."

We started with the Sorrowful mysteries and got up to the fifth mystery, the Crucifixion, when there was an accident. One of the young children with us fell and ended up with a bloody nose. The Rosary and vigil were put on hold while we tended to the injured child.

The poor young mother was very apologetic but I hope we assured her that she had nothing to apologize for. As my mother pointed out later, the blood of an innocent child was spilled in front of Planned Parenthood. Very symbolic.

After the child was comforted, we finished praying the Holy Rosary and the Priests for Life Prayer that is prayed in front of an abortion mill.

During this time a gentleman passed by us. As he past by me he handed me a bag of ice cold bottled water. I hope I thanked him enough for the water was a blessing on this hot and sunny day.

Later we prayed a Hail Mary for his intentions.

The young mom and her children left was following the prayer and we continued to pray the Divine Mercy Chaplet, silent prayer and then some hymns.

Another gentleman approached us. He was an elderly Jewish man. He was asking us some questions about whether or not we were actually making a difference. He then shared that the government cut off his benefits because they did not consider him of any value. That made us sad.

That hour went by quickly.

We hope to do it regularly as a group during these 40 Days. I hope you can join us.
Posted by EC Gefroh Posted 2:42 PM