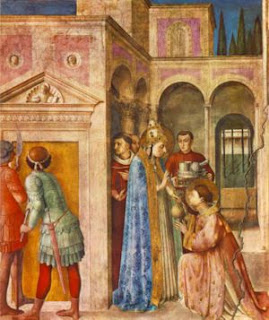 In the painting by Fra Angelico we see St. Lawrence receiving the Church's treasures from St. Sixtus.

"In August of A.D. 258, the emperor Valerian ordered that all deacons, priests, and Bishops be put to death. Tradition via the Golden Legend tells us that Pope Sixtus II met with Lawrence, saying to him:

"I shall not leave thee, my son, but greater strifes and battles be due to thee for the faith of Jesus Christ. We, as old men, have taken more lighter battle, and to thee as to a young man shall remain a more glorious battle of which thou shalt triumph and have victory of the tyrant, and shalt follow me within three days."

Then he delivered to him all the treasures, commanding him that he should give them to churches and poor people. And the blessed man sought the poor people night and day, and gave to each of them that as was needful, and came to the house of an old woman, which had hid in her house many Christian men and women, and long she had had the headache, and St. Laurence laid his hand upon her head, and anon she was healed of the ache and pain". Source:Fisheaters

Lawrence replied that the Church was indeed rich. “I will show you a valuable part. But give me time to set everything in order and make an inventory.” After three days he gathered a great number of blind, lame, maimed, leprous, orphaned and widowed persons and put them in rows. When the prefect arrived, Lawrence simply said, “These are the treasure of the Church.”

Source: Saint of the Day
Posted by EC Gefroh Posted 9:14 AM

Isn't his faith amazing? St. Lawrence, pray to God for us.

It sure is Mimi!