ACN-USA News - In Nigeria, a kidnapped seminarian is found murdered 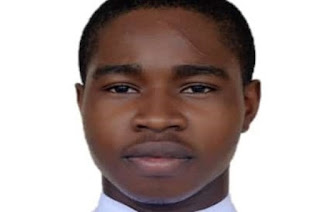 In Nigeria, a kidnapped seminarian is found murdered

MICHAEL NNADI, an 18-year-old Nigerian seminarian was found murdered Feb. 1. On Jan. 8, he had been abducted by unidentified assailants, along with three other seminarians, from the Good Shepherd Seminary in Kaduna in northern Nigeria. Michael’s three fellow students were all eventually able to regain their freedom.

“With a very heavy heart, I wish to inform you that our dear son, Michael was murdered by the bandits on a date we cannot confirm. He and the wife of a doctor were arbitrarily separated from the group and killed. The Rector identified the corpse this afternoon,” Bishop Matthew Hassan Kukah of Sokoto, Nigeria, said in a statement released Feb. 1.

According to local media, another murder victim found was the wife of a doctor living in Kaduna. She had apparently also been abducted by armed men, on Jan. 24, along with her two children.

“I am appalled at the unleashing of such terrible evil,” said Thomas Heine-Geldern, the executive president of Aid to the Church in Need (ACN). “The news of the brutal murder of this innocent young man saddens me deeply.”

According to Heine-Geldern, local Catholic communities are demonstrating an admirable degree of faith and trust in God, as evidenced by the final words of Bishop Kukah‘s message: “The Lord knows best. Let us remain strong and pray for the repose of his soul.” Heine-Geldern said the task of ACN must be to support and sustain the Nigerian Church on its Way of the Cross, by means of prayer and practical help.

“At the same time, the world needs to wake up. The Nigerian government is facing an enormous challenge. The insecurity is as bad as in times of civil war. Nigeria is a multi-faith and multi-ethnic nation, and security must be provided for all,” Heine-Geldern insisted.

One of the teaching staff at the seminary in Kaduna, who asked not to be named, told ACN:  “Michael was a young and gifted seminarian. He was an orphan who had been brought up by his grandmother. Just a few weeks ago, after a year of spiritual preparation, he had been clothed in the soutane. It seems that his only crime was his desire to serve God. The security forces and the government have failed him.”

Two of the three seminarians abducted along with Michael were released Jan. 31. Two weeks ago, another of the seminarians was found badly wounded, lying by the side of a highway.

Kidnappings of this kind are a regular occurrence in Kaduna State. According to the Council on Foreign Relations (CFR), an independent US organization, 114 people were abducted in Kaduna State in January 2020 alone—the highest figure among Nigerian states. The motive for the kidnapping of the four seminarians remains to be revealed.

Archbishop Augustine Akubeze of Benin City, president of the Nigerian bishops' conference, told ACN that attacks against Christians are "due to lack of security in the entire country." The Church, he added, lacks resources, such as video cameras in churches and seminaries, which "would be useful at least to capture some terrorists."

With picture of Michael Nnadi (© ACN)

Posted by EC Gefroh Posted 10:20 AM No comments:

ACN News -URGENT: Priest pleads for prayers as bombs explode around him

Posted by EC Gefroh Posted 9:26 AM No comments:

ACN News -Syria, a country in agony, is ‘living an anticipated Lenten fast’ 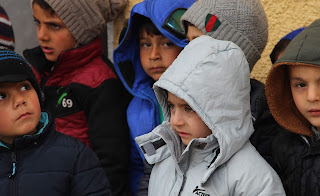 According to Maronite Archbishop Samir Nassar of Damascus, the continuity of the humanitarian aid projects within the country is in danger, even as the economic situation in Syria is growing worse.

“The present crisis, which is different to what we experienced during the days of the war, has compelled the people to live a sort of anticipated Lenten fast. Simply managing to put food on the table has become a daily nightmare.”

So says Archbishop Samir Nassar in a message to the headquarters of the international Catholic pastoral charity and pontifical foundation Aid to the Church in Need (ACN).

Owing to the economic crisis, which is a consequence not only of the war but also of the economic embargo imposed on the country by the Western powers, the ordinary people are facing rationing of various basic essentials.

“The shortage of fuel, domestic gas supplies and electricity, has plunged the most vulnerable – the fragile, the sick, children and the elderly – into obscurity coupled with deadly freezing temperatures,” Archbishop Nassar lamented.

For her part Sister Maria Lúcia Ferreira, of the congregation of the Sisters of Unity in Antioch, also confirmed to the Portuguese office of ACN that “things are getting much worse.”

“For example, gas can only be exchanged in return for vouchers, and each family is allowed just one gas bottle per month”, she explains, adding that the situation is so serious for some families that they can “scarcely afford to buy food,” while “those who arrive late come away empty-handed…”.

In the same way, she explains, “there is a shortage of fuel for heating the houses; the electricity supply cuts out almost every day and people’s money is worth less and less each month.”

According to Sister Maria, one of the reasons for the current situation is the crisis in neighboring Lebanon, since much of the funding that used to come via Lebanon is now impossible to get.

It is an assessment with which Archbishop Nassar concurs. He insists that the banking crisis in the neighboring country is imposing grave obstacles on the humanitarian aid supplied for Syria by other countries in the world.

What the Archbishop describes as the “road of Simon of Cyrene” – in other words of solidarity with those who are carrying the cross – has been “blocked without compassion,” resulting in an overall worsening of conditions everywhere.

Among other things, the crisis in Lebanon has resulted in the freezing of the accounts of the Syrian people, including both the company accounts and private accounts, from which formerly what Archbishop Nassar describes as the “movements of charity” originated.

According to the Archbishop, the present situation has also made things harder for the Church, which is now nothing more than “a Wall of Lamentation where one comes to weep, to cry for help, and look without ostentation and silently, for some consolation, to live out the passion of Christ before Holy Week.”