ACN-USA News - In Nigeria, a conversion to Catholicism was dream come true 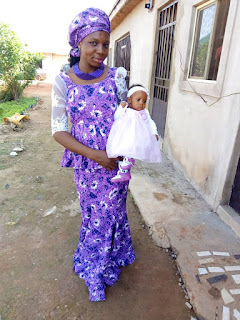 A life-long attraction to the Catholic faith finally brought a young Nigerian woman to leave her Protestant faith for the Church of Rome. Her journey of faith was not an easy one:

“I’ve wanted to be a Catholic since I was a child, and I am glad that I have finally realized that intention.

“My name is Jennifer Ondoma. I am Igbo by tribe, from Delta State in Nigeria; I am 30-years-old and the proud mother of one. I was born into a dedicated Pentecostal family, but my admiration for the Catholic faith knows no bounds.

“It all started at the age of ten: my neighbors were Catholics, and they would always intimidate me by saying the rosary in the neighborhood church along with other Catholic families, every blessed day. Whenever they were set to go, I secretly admired them, and I wished that one day I would have the opportunity to go with them.

“When the opportunity finally came, I immediately and heartily grabbed it. That fateful day, I snuck out of the house and followed them to the church. Nothing mattered more to me than knowing how to say the rosary.

“Afterwards, while approaching my house, my heart skipped. I was breathing faster than usual. When I stepped into the compound, I found my parents waiting for me. I received a beating and a concrete warning to stay away from the Catholic Church. But the warning fell on deaf ears. That incident only strengthened my faith. My parents did all that they could to stop me, but my mind was already made up.

“That year same year, I was sent to Lagos to stay with my uncle, who was more like a father to me. On my first Sunday in his house, I was amazed to learn that he was a Catholic. I couldn’t hold in my happiness. I was so excited that when he asked me if I’d been baptized, I was completely lost in thought.

“But instantly, I returned to reality and responded, ‘No, sir.’

“I was quickly enrolled in catechism classes, and after that, I was baptized and received my first Holy Communion. Two years later, I was confirmed. It felt amazing.

“I love everything about the Catholic Church: the mode of worship, the Mass, the Legion of Mary, the Novena to Our Lady of Perpetual Help, the Blessed Sacrament. All of these contributed positively to my growth as a devout Catholic and a good Christian.

“Many people have tried to bring me back into the Pentecostal church; they say that one cannot spiritually grow in the Catholic Church, but that is a fallacy.

“My first experience after conversion was not a pleasant one, however. I was not welcomed by my parents, and I lost a lot of friends. Some relatives decided to break all ties with me. There were pressure everywhere. When I entered the family compound with a rosary around my neck, my parents forcibly removed it.

“But I found courage. It was indeed a rough journey, but I was steadfast and emerged victorious.

“I once had a suitor who was a pastor in one of the Pentecostal Churches. I was astonished when he placed a condition on our relationship: he said, ‘Before we can get married, you must be converted to my faith.’ I didn’t know what to do. My faith was at odds with my happiness. But when he said that Catholics were idol worshippers, my decision was made. I ended the relationship. And I am now happily married to a devout Catholic.

“Without fear, I can categorically say that I am not threatened by the Islamic faith, even with all that my country has seen. I encourage Catholics everywhere to remain steadfast: I have been lonely, and I have experienced many ups and downs. But I keep the faith, and everything I feel, I share with God in my prayers. It pays to be righteous.”
—Patience Ibile

With picture of Jennifer Ondoma and her baby girl (© ACN)