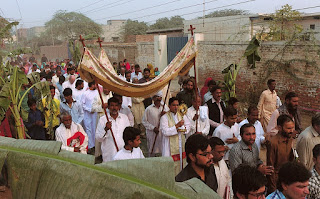 BINISH PAUL is 18-years-old and a Christian. She attends public school in Pakistan. On Aug. 22, 2018, a young Muslim man, Taheer Abbas threw her from a second-story roof: he was angry that Binish had refused to marry him and convert to Islam.

The brutal act was another example of violence being used to force conversion, charged Binish Paul’s lawyer, Tabassum Yousaf.

Ms. Yousaf reported: “For months, Taheer had been putting pressure on Binish to convert to Islam. Over and over again, she refused. This culminated in the violent act, during which the young woman sustained severe fractures to her legs and spine.”

As is often the case in such incidents, this places the family of the young Christian woman in a difficult position. The parents turned to the local police, but the officers declined to file charges.

Moreover, the director of the hospital refused to issue the medical report necessary to document the injuries.

“They also received serious threats from the family of the perpetrator. If the case were not closed, then they would all be accused of blasphemy,” said Ms. Yousaf, who is Catholic.

The lawyer filed the charges directly with the court, the hospital was forced to provide a medical report. This made it possible to arrest Taheer Abbas two days after the crime.

Ms. Yousaf said: “When similar attacks happen in our Church community, the main problem is that the Christians in Pakistan often belong to the poorest social groups and are not aware of their rights. For example, hardly anyone knows that you can file charges with the courts.”

“The refusal of the police to open a case, together with threats from the relatives and friends of the perpetrators, ensure that many families do not even report the crimes they have suffered.”

As a result, there are many incidents of young Christian women being forced to convert that never become public knowledge.

“When I was studying law, I was also pressured by a young Muslim, a friend of mine. Fortunately, my family and my brothers protected me.”

“Young Christian women who come from simple circumstances, however, are powerless against their attackers,” said Ms. Yousaf.

She reported that each year 15 to 30 cases similar to that experienced by Binish occur in the southern Pakistani city of Karachi alone. In comparison, the number of times these incidents are reported to the police can be counted on one hand.

“Many people are afraid because the Muslim community threatens to rape or kill the women of these families,” said Ms. Yousaf.

“In Pakistan, it is difficult to receive justice if you are a member of a religious minority,” the lawyer added; the judges are under pressure from the political parties.

She continued: “They do not offer our brothers and sisters in faith adequate and fair legal assistance. Many members of minority groups are not even aware that they have the same rights as Muslims.”

“As a Catholic lawyer, I consider it important that they have access to more information in this area and receive legal assistance. I am rendering this service for God and my Church.”

With picture of a Christian procession in Faisalabad, Pakistan (© ACN)