ACN News - Consecrated to Our Lady of Fatima, Aid to the Church in Need turns 70 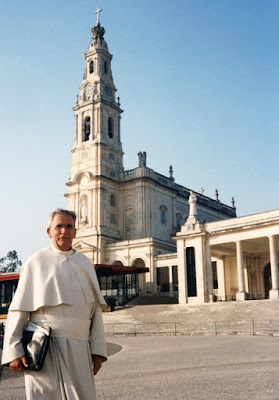 The May 13, 2017 canonization by Pope Francis of two Portuguese shepherds to whom Our Lady appeared 100 years ago at Fatima has particular resonance for international Catholic charity Aid to the Church in Need (ACN).

Celebrating its 70th anniversary this year, ACN was consecrated 50 years ago to Our Lady of Fatima. With the Pope coming to Fatima to canonize them, Jacinta Marto and her brother Francisco will be the youngest non-martyrs proclaimed saints in the history of the Church.

Our Lady of Fatima certainly has worked wonders for ACN. George Marlin, chairman of ACN-USA, explained: “From the very beginning, this charity has been a miracle: it has given countless people the strength to forgive and to show unconditional magnanimity.”

“The organization grew out of a belief in Jesus Christ as well as the staunch conviction that the Gospel holds the truth. Today, our charity continues to bear witness to the living God as hundreds of thousands of people all over the world support our brothers and sisters in the faith in His name.”

ACN was founded in 1947 by the Dutch Premonstratensian priest Father Werenfried van Straaten. From the very beginning, the focus was on fostering reconciliation as well as bringing about the love of one’s enemies as called for in the Gospel.

Tellingly, the charity which began as an aid campaign to help German refugees after World War II, was launched in Belgium and the Netherlands, whose populations had suffered greatly under German occupation.

The aid for the “enemies of yesterday” was thus not only intended to alleviate the immediate distress of the people, but also to overcome hatred, foster reconciliation in a ravaged and hostile Europe—and at the same time become a “school of love” for those who bestowed the aid.

Growing rapidly, ACN extended its activities to encompass the countries behind the Iron Curtain as well as those in Asia, Africa and Latin America.

Over time, ACN began to focus its efforts on supporting the pastoral work of the Catholic Church in countries and regions where the faithful suffered various forms of discrimination and persecution, or where local Churches lacked the necessary means to fulfill their mission.

Next to providing material aid, one of ACN’s primary concerns was giving the persecuted “Church of Silence” a voice.

The work of ACN is closely linked with the message of Fatima and the organization is organizing various holding various campaigns to celebrate the 100th anniversary of the appearances of Our Lady at Fatima. The festivities will culminate with a large international pilgrimage to the Portuguese shrine in September 2017.

Father Martin Barta, ACN’s international ecclesiastical assistant explains that the founding of the charity should be considered within the context of the October revolution and the appearances at Fatima, during which Our Lady warned of the perils of communism.

Father Barta said that ACN, taking its cue from the messages at Fatima, has “grown into a global spiritual movement” that calls for a “rebellion of the heart”—a “revolution” not based on the “false myths of godless communism or humanistic relativism, but on the reality of the cross of Jesus Christ, His Pierced Heart.”

He added: “In the end, [Our Lady of Fatima’s] Immaculate Heart will triumph.”

ACN was consecrated to Our Lady of Fatima because Father van Straaten considered the foundation of the charity to be a response to the message of Fatima, which had warned of “total rebellion against God.”

That threat first occurred in the October Revolution in Russia, which initiated persecution of the Church of unmatched severity; and its legacy still continues today in various forms throughout the world.

The work of ACN is an immediate answer to the Mother of God’s call conversion and a turning toward God, suggests Father Barta, adding that: “As a pontifical foundation, we want to intensify our efforts in helping the Church carry the triumph of the Immaculate Heart of Mary all over the world.”

Today, ACN supports more than 5,000 projects each year in more 140 countries, with funds raised through the work of 23 national offices.

Currently, ACN’s prime focus is on helping persecuted and threatened Christians in the Middle East and preventing the purging of Christian communities from the cradle of Christianity. Another major objective is to support the young and vigorous but materially poor Church in Africa.

With picture of Father Werenfried outside the Basilica of the Most Holy Trinity, Fatima, Portugal (© ACN)