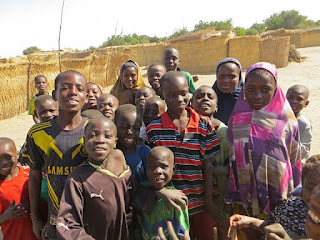 The faithful of the Diocese of Maroua-Mokolo in Cameroon are very afraid of suicide bomber attacks by Boko Haram. The group may have suffered significant setbacks in neighboring Nigeria, but the jihadist terrorists continue to wreak havoc in Cameroon.

When local Bishop Bruno Ateba celebrates Mass outdoors, it’s now customary that the worshipers hold hands, forming a circle, to prevent suicide bombers from mingling unnoticed among members of the community. Plus, large handbags are barred and volunteers screen Mass-goers for weapons and explosives.

“Many of the suicide attacks are carried out by very young people,” the bishop told international Catholic charity Aid to the Church in Need (ACN). He added that just last month two teenage girls blew themselves up in a local marketplace.

Nonetheless, the local Catholic community is undeterred from gathering: “Prayer is our strength and our hope. We need prayer! We want to pray! Prayer in community is a sign of hope,” said Bishop Ateba.

At times, the very act of prayer can save lives. Last February, during Lent, suicide bombers killed 20 people in the village of Mémé—the death toll would have been worse if many locals had not been inside a church praying the Stations of the Cross.

The bishop expressed dismay that the suffering of his flock fails to generate coverage by international media. “When something happens in Europe, the news immediately spreads around the entire world. It is like an earthquake. But if people die here in Cameroon or in other African countries, it is not a big issue,” he said.

The Diocese of Maroua-Mokolo also faces a huge humanitarian crisis as it is helping to care for close to 80,000 Nigerian refugees living in a camp; there are 5,000 Catholics among them.

“Many of the people would like to return to their homeland, but they need safety and prospects! Many have already been there for four or five years and cannot go home,” Bishop Ateba said.

In addition to refugees, the diocese is also hosting 50,000 internally displaced Cameroonians, who fled villages right at the border with Nigeria. The local Church is a vital source of support for these IDPs.

Nonetheless, there are bright spots. Vocations are plentiful: there are 30 seminarians preparing for the priesthood. The bishop is also very happy with what he called the “wonderful dialogue” that has opened up with Muslims, despite the problems with Boko Haram.

Many Muslim children—even the sons and daughters of religious leaders—are attending Catholic schools. “The average Muslim is also opposed to Boko Haram,” the prelate said.

Meanwhile, local Catholics continue to pray ardently for peace; “the hope of the people is primarily rooted in their belief in God. We trust in prayer,” the bishop said.

“Prayer is our strength. And, despite the attacks, we will not stop gathering and asking God for this peace.”

Aid to the Church in Need gives some $1.8M in aid for Cameroon each year.

With picture of faithful in the Diocese of Maroua-Mokolo (© ACN)