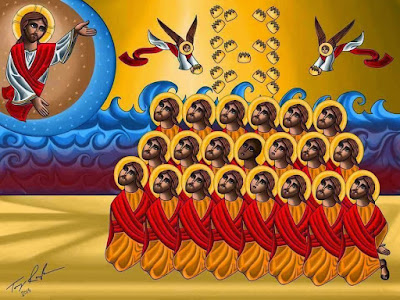 The gruesome images of the 21 Christians who were beheaded in last February by Islamic State terrorists have left a deep imprint on the memory of Christian Egyptians.
Now a new church dedicated to the martyrs—who are formally recognized as such by Egypt’s Coptic Orthodox Church—will honor their memory in a tangible fashion.

This week—after a long delay—work began on laying the foundations of the new church in the Coptic-Orthodox Diocese of Samalout, from which most of the martyrs came.

The project had been authorized directly by Egyptian President Abdel Fattah el-Sisi shortly after the tragedy, but resistance by local Muslim authorities delayed the start of construction.

Bishop Paphnutius of Samalout said, “We are extremely proud of our martyrs. Although they were forced to kneel before their executioners, they were the stronger. Their murderers were the weaker, despite their weapons.”

“Why would they have concealed their faces otherwise? It could only have been because they were afraid,” he insisted.

“Our sons by contrast were very strong and called on our Lord until their very last breath.”

Bishop Paphnutius interprets their martyrdom spiritually. “The Church has always known that the blood of martyrs is the seed of faith. It will remain so until the end of time,” he said.

“From Alexandria to Aswan, throughout Egypt, Christians have been strengthened in their faith. Muslims from all over have also told us that they are proud; they say that our martyrs have shown that we Egyptians are very strong.”

“Their death fills all of us, Christians and Muslims alike, with pride.”

The crime’s repercussions are still felt today. After all, the martyrs have left widows and children behind. “Thanks to generous donors, we are able to provide for the surviving dependents,” stated Bishop Paphnutius.

The martyrs’ children are calm and composed when speaking about their fathers. Ingy Tawadros (14) is one of the three children of Tawadros Youssef Tawadros. This victim had experienced a lot of difficulties in Libya because of his name, which was easily recognizable as Christian; he had often been asked to change it, but refused, reportedly saying—according to his teenage daughter—that “if you change your name, you are ultimately also changing your faith.”

Next to Ingy sit her two little brothers. The younger one is six at most. “I am proud of my father,” she said; “not just for my own sake, but because he has honored the whole Church.”

“He did not deny his faith. That is something wonderful. We pray for the perpetrators, that they may be converted.”

Yet, however much the children bear the loss of their fathers in faith, some have tears in their eyes when talking about them.

“My father is in heaven,” said another girl. “But I am still sad, because that is such a long way away.”

With picture of the icon depicting the 21 martyrs, whose feast day will be Feb. 15 on the Coptic Orthodox calendar (© ACN)