No one has greater love than this, to lay down one's life for one's friends..John 15:13 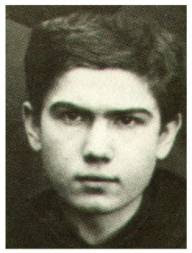 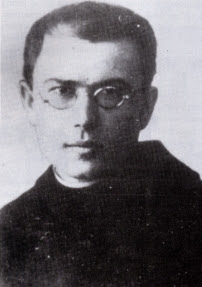 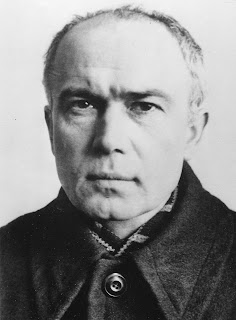 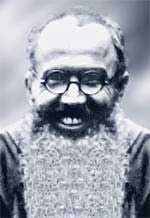 Oh where do I begin? There is so much I want to share about St. Maximilian Kolbe with you.

By now most of us know that Maximilian Kolbe was a Polish priest, a Franciscan. He was imprisoned in Auschwitz one of the notorious Nazi death camps and ultimately gave his life to save the life of a fellow prisoner. Note: With his love and devotion to our blessed Mother it is of no surprise that God chose to take him on the vigil of the Feast day of the Assumption of the Blessed Mother.

"Francis Gajowniczek, the man for whom Maximilian Kolbe gave his life, survived the war and was present at the 1971 beatification (blessing) ceremony of Father Kolbe. Gajowniczek died in 1995".

One book I would highly recommend is a dual biography of a saint and a Nazi. Kolbe and the Kommandant: Two Worlds in Collision The following is from the book's introduction:

A most amazing story that not only reveals the life of a Saint - but the last days of none other than Auschwitz Kommandant Rudolph Hoess.

As a dual biography of a great saint and of one of the greatest criminals ever to scourge mankind, this book accomplishes what separate biographies of the two men could only suggest.

It shows the inevitable deadly collision of the two worlds that each represented, a collision that also produced unexpected atonement, conversion and healing.

In the process, this double biography reveals mankind's last real hope for deliverance from the crazed, satanic forces that still afflict it. Rarely has the conflict of the two opposing worlds been so dramatized and epitomized as in the stories of Maximilian Kolbe and Rudolph Hoess.

What elevates the story of Kolbe and Hoess to the level of an epic, is that both men were strikingly alike in their early lives and ideals. Both later became leaders who radically changed the lives of countless millions of people.

For most of us, it is hard to appreciate and believe that tremendous power of Kolbe's faith, love and life until precisely we see something of the "inconceivable darkness" that they overcame.

There is so much more to know about this amazing saint. One of the things that was of interest to our family because of Joey's nationality, is that Fr. Kolbe went to Japan to bring Christianity to the Japanese people.

O Immaculata, Queen of Heaven and earth, refuge of sinners and our most loving Mother, God has willed to entrust the entire order of mercy to you. I, (name), a repentant sinner, cast myself at your feet, humbly imploring you to take me with all that I am and have, wholly to yourself as your possession and property. Please make of me, of all my powers of soul and body, of my whole life, death and eternity, whatever most pleases you.

If it pleases you, use all that I am and have without reserve, wholly to accomplish what was said of you: "She will crush your head," and "You alone have destroyed all heresies in the whole world." Let me be a fit instrument in your immaculate and merciful hands for introducing and increasing your glory to the maximum in all the many strayed and indifferent souls, and thus help extend as far as possible the blessed kingdom of the most Sacred Heart of Jesus. For wherever you enter you obtain the grace of conversion and growth in holiness, since it is through your hands that all graces come to us from the most Sacred Heart of Jesus.

V. Allow me to praise you, O Sacred Virgin
R. Give me strength against your enemies

BTW, did you know that St. Maximilian also had a devotion to the Divine Mercy? That is why he along with St. Faustina and John Paul II are always mentioned by our family's in a little litany at the end of the Divine Mercy Chaplet.

And lastly, a very happy 11th birthday to my nephew Carlos, who was blessed to be born on this great saint's feast day.
Posted by EC Gefroh Posted 5:14 PM

Thank you, Esther for this great information on our dear St. maximilian Kolbe. I just wrote about him in a book of the saints I just finished that will be out next year by Our Sunday Visitor.

Have a happy day, Esther, and thank you for being a shining light to others!

Esther,
That was a fascinating book info.
I think I'll try and see if I can get it here in the UK-and if not I'll just order a US copy.

I have a love of St Max Kolbe because of his magazine endevour. I want to be able to share the Faith with Catholics-those who have not been catechised and am struggling with how to go about it.
I must go back to this saint again and ask again.
God bless

Donna; So glad you enjoyed this post. As you can see, I love this saint :-)

WhiteStone: Maybe your library carries it.

Great post and information. Another biography I would recommend is "Forget Not Love."

Thanks Chris. I will have to look into that one.