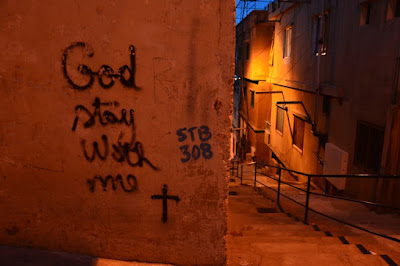 Somewhere in the Beqaa Valley, Lebanon (July 13, 2016)—Let us call them Samir and Sabine. Let us say they are in their early 50s, Christians who have fled from Raqqah, Syria, the ISIS stronghold.

“No photo, no names!” Samir’s gesture is clear: otherwise his head will roll, he darkly suggests. Then he lets his arms fall back to his sides, in his hands is a piece of paper: a receipt for the tax on Christians in levied by the Islamic State.

The amount that the jihadists levy per year and family is about $4,000—protection money, but no one is safe from the terror, the man said.

Samir and his family were doing well in Raqqah. And then ISIS came. Samir paid. When the threat became bigger, the family converted to Islam.

“I hated the life, the veil, and that I wasn’t allowed out on the street without a male escort,” Sabine explained. “That is not for us Christians!” Samir prayed at the mosque for the sake of appearances, to protect his family.

Then a car with fighters pulled up at the family home. Someone had denounced the family, saying that they had not really converted to Islam, and that were still praying at home to their Christian God.

Samir and his family were able to flee. They found shelter with a Muslim friend. They made their way to Aleppo, but the terror followed them. “After two months in Aleppo, I received a call. They told me that they would come and kill me,” Samir said.

The family fled again, this time to Beirut, the Lebanese capital. Until the phone rang there again, “We know where you are!” The implied threat drove the family to the Beqaa Valley.

Samir and Sabine are happy that they no longer have to renounce their faith. “We had a picture of St. Charbel with us the entire time, that is what saved us,” Sabine said. They both say that their faith is “stronger than ever.”

However, their faith is also the reason why they want to leave the Middle East. “We aren’t safe anywhere here,” Samir said. The phone has already rung where they are now: “No matter where you are, we will find you!”

“There are families here who had to climb over the corpses of their neighbors so that they could flee,” said Sana, the only one to give her name. Sana is Lebanese and, with the support of Aid to the Church in Need (ACN), the international Catholic charity, she has been helping the refugees in her city since the beginning of the Syrian crisis.

“Their children are still drawing these scenes of horror today.” It will take time to come to terms with this trauma, but Sana is happy that some of the refugees have started to talk about what they have experienced.

She calls herself Maria. The Christian from Sadat does not want to tell her own story and talks about her neighbors instead.

“That night in October 2013,” she said, “the men from ISIS came. They called out ‘Allahu Akbar’ three times. Then they killed everyone: the grandmother, the grandfather, the parents, the daughter and the son.”

“Three generations. They threw the corpses into the fountain.” Maria falls silent.

Andrea Krogmann is a reporter for KNA, the German Catholic news agency.

With picture of graffiti in the town of Zahle, in Lebanon's Beqaa Valley (© ACN)