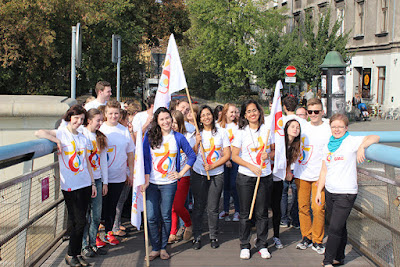 Some 3,500 young people from 29 different countries will be able to attend World Youth Day in Krakow, Poland July 25-31, 2016, thanks to the support of international Catholic charity Aid to the Church in Need (ACN).

Many of the youth hail from countries close to Poland: “The young people of Ukraine, Bosnia, Belarus, Bulgaria, Russia and Macedonia are delighted at this opportunity to come together personally with Pope Francis in Poland.”

“Due to the costs involved, most of them have never had the opportunity to participate. For this reason we wanted this year in particular to enable as many young people as possible to personally experience this closeness with the Pope and with other young people from all over the world.” This was the assessment of Magda Kaczmarek, one of ACN’s project coordinators for Eastern Europe.

Meeting with the Pope and living out the experience of the Universal Church can likewise be a life-changing experience for young people from many of the tiny Catholic communities of Central Asia, such as Kazakhstan, Kyrgyzstan and Turkmenistan, which is believed to have little more than 100 active Catholics.

The organization has also made it possible for youth from the Middle East to attend World Youth Day 2016. They will represent Churches that are coping with great suffering in countries like Iraq, Syria, Jordan and Palestine. Their presence will personify both the hope of the early centuries of Christianity and the courageous faith of the present-day descendants of the early Christians.

Relying on the generosity of its donors, ACN will be able to make a huge difference in the lives of so many young people.

Their experience of World Youth Day, however, does not just depend on financial support—ACN is also calling on its donors around the world for fervent prayer to make the event a success and to make it possible for youth from countries and regions embroiled in violent conflict to be able to make the journey to Krakow and back home again in safety.

In all, ACN is funding 40 different World Youth Day 2016-related projects, the bulk of them to send youth to Poland. Total funding involved tops $600,000, which also makes possible events in particular countries that will take place simultaneously with World Youth Day, such as a national event in Cuba and other Latin American nations.