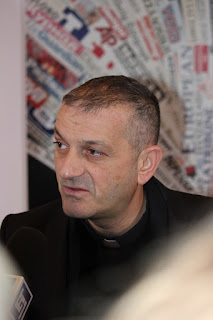 “Masked men came into the monastery of Mar Elian and abducted me along with a volunteer. They forced us into a car and then left us in the middle of the desert for four days, blindfolded and chained up. Then they took us to Raqqa, the capital of ISIS."

So began the account of Father Jacques Mourad, the Syrian priest kidnapped by ISIS May 21, 2015 and released Oct. 2015. He spoke at a press conference here organized by international Catholic charity. This marked the first time the monk spoke publicly about his ordeal.

"In Raqqa they kept us shut up in a small bathroom,” the priest continued; "they deliberately chose this place in order to humiliate us – but then our mission is to be humble, even in the face of violence." Father Mourad would spend a full 84 days in that space.

"The jihadists frequently insulted us, but what was most difficult is when they tried to intimidate us, saying: 'Either you convert to Islam or we cut off your head.’”

During the long months of imprisonment Father Jacques found comfort in reciting the Rosary and in the prayers of abandonment composed by Father Charles de Foucauld, "a victim of violence who devoted his entire life to Christian-Islamic dialogue.”

For Father Mourad interreligious dialogue has also been at the very heart of his mission; he spent 15 years supporting the families in Qaryatayn, Christians and Muslims alike. He believes that this work on behalf of religious dialogue may be what prompted ISIS to abduct him.

"Though undoubtedly the good I was able to do for the population was a determining factor in my liberation; I am certain it was one of the reasons that prevented ISIS from killing me."

On Aug. 11, 2015, ISIS fighters put Father Mourad in a car and drove off for four hours. "I thought my last hour had come," the priest said.

Once the car stopped and he got out, the monk recognized a young man from his own parish. Behind him were the 250 Christians abducted by ISIS just a few days earlier from Qaryatayn.

Father Mourad and his flock were now close to Palmyra, where they would stay until Sept. 1, 2015, at which point the group was brought back to Qaryatayn, where the priest would remain in captivity, though he said that "we almost went back to a normal life, but we were absolutely forbidden from leaving the city."

During the 40 days he spent in Qaryatayn, he was able to celebrate Mass in underground places, "both in order not to be seen while we were praying and in order to take shelter from the bombings.”

Then on October 10, with the help of a Muslim man and a Syrian Orthodox priest, Father Mourad succeeded in escaping the city.

"Life in Qaryatayn had become impossible – with no food, no water, no electricity. Little by little all the Christians left the town.”

“There are just 11 faithful left there, still in the hands of ISIS, while eight of the Christians have been killed by the jihadists."