Two "Symbols of Hope" in Iraq

Fresh plans for a university and a hospital in northern Iraq are intended as “symbols of hope” enabling Christians to build a future away from the violence and intimidation that have caused so many to flee the country.

The two initiatives planned for Ankawa, a suburb of the Kurdish capital, Erbil, passed a crucial hurdle Monday, Jan. 31st, when the regional government guaranteed a gift of two pieces of land on which to build both structures.

The 322,917 square-foot site allocated for the university is close to an 86,111-square-foot plot set aside for the 100-bed hospital complete with eight operating theatres and a medical wing.

Announcing the plans to Catholic charity Aid to the Church in Need, Archbishop
Bashar Warda of Erbil said both initiatives would provide jobs, training and other opportunities for thousands of Christians flooding into the relative security of Kurdistan, away from the religious violence, especially in Baghdad and Mosul.

Speaking after a committee of faithful and clergy met to advance the initiatives, Archbishop Warda said, “The plans we have been developing over the past few months are symbols of hope for the Christian presence in our country.”

He went on to explain how both initiatives emerged in response to a growing realization that the influx of Christians into the area included many highly-skilled professionals with expertise in education and medicine.

Speaking from Erbil, Archbishop Warda told ACN, “The people arriving here from places of violence are receiving the gift of relative security.”

“They themselves are willing to offer the gift of their services in a region which cannot cope with the demands of an increasing population.”

Although both the hospital and the university will be Church-run and owned by the Archdiocese of Erbil, Archbishop Warda stressed that both would open their doors to all people irrespective of religious and political differences.

Archbishop Warda said that before building work could begin, a fund-raising campaign was necessary.

He said he hoped governments in the West as well as charities and other NGOs would be generous.

The archbishop also said he hoped to receive advice and support for similar initiatives elsewhere in the Middle East, such as the Holy Spirit University of Kaslik, in Lebanon, founded by Maronite Catholics in 1961.

He added that if the plans proceed as scheduled, the two institutions could open within two years.

The archbishop went on to stress that a key factor behind both projects was to provide jobs and other opportunities, thereby discouraging the Christian exodus from a country whose faithful have plummeted from more than 800,000 to barely 200,000 within a decade.

He said, “We do not want Christians to leave Iraq. It is clear that our society here needs schools, universities and hospitals and this provides us with an opportunity to encourage the Christians to build a future for themselves here.”

Successive waves of killings, kidnappings and other violence have forced vast numbers of Christians to flee Baghdad and Mosul, seeking sanctuary especially in the north under the control of the Kurdish Regional Government, which is now one of the only parts of Iraq largely untouched by violence against minorities.

The latest wave of new arrivals came after the October 31st, 2010, massacre in Baghdad’s Syrian Catholic Cathedral, where 58 people died and more than 70 were injured.

Archbishop Warda said Christians coming into his diocese included 2,000 from as far away as Basra in the south.

Iraq is a priority country for project support from Aid to the Church in Need. ACN is providing emergency help for Iraqi Christian refugees in the north of the country and neighboring countries, as well as key aid for seminarians, Sisters and Mass stipends for priests. 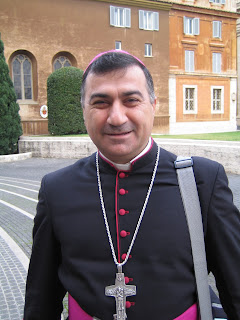 With picture of Archbishop Bashar Warda of Erbil, northern Iraq

Praise God! Hope! There's always hope! Prayer can succeed when all else seems to fail! Thank you! Cathy